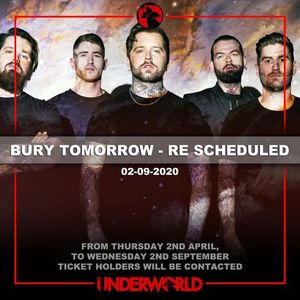 Bury Tomorrow at The Underworld Camden - Re Scheduled

Wed Sep 02, 2020
Bury Tomorrow at The Underworld Camden - Re Scheduled 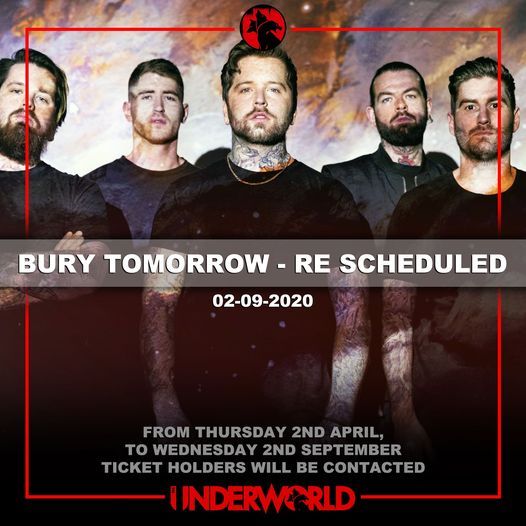 Bury Tomorrow at The Underworld Camden - Re Scheduled

Bury Tomorrow will release their sixth album, Cannibal, on April 3rd via Music For Nations / Sony

Bury Tomorrow‘s 2018 album Black Flame catapulted them into metal’s upper echelons. It was the band’s third consecutive UK Top 40 album – quite the feat for a heavy band – and took them on a tour which culminated with a huge show at London’s iconic Roundhouse. But with follow-up Cannibal, the band have taken another leap forward.

Already, the South Coast quintet are responsible for some of metalcore’s most rousing anthems, and Cannibal is stacked with more glorious vocal hooks, razor-sharp riffs and sublime melodies that will solidify their seat at UK metal’s top table.

To record it, the band reunited with SikTh guitarist and Black Flame producer Dan Weller (Enter Shikari, Young Guns), while mixing and mastering was completed by Adam “Nolly” Getgood and Ermin Hamidovic, the dream team behind Architects’ Holy Hell. The result is Bury Tomorrow’s most technical, anthemic album yet. And while vocalist Dani Winter Bates has long been one of metal’s loudest advocates for the importance of discussing mental health, this time he’s delved explicitly into his own experiences, writing his most brutally personal lyrics to date.
“This album is for me as well as for the fans,” he says. “It was a cathartic process to address some of the darkest moments I’ve had in my life. For some people it’ll be a hard listen. But I thought I have to do this, if I’m going to go in, I’m going to go in. I’m not doing something half arsed. There is nothing lyrically I would change on this entire album.”

When Dani began writing the concepts for Cannibal, while he had penned tracks about his mental health before, this time things were different. Dropping all metaphors and opaque sentiments, he’s addressed things head on, hoping the album’s unapologetically frank approach will help people who are struggling to understand that they aren’t alone.

“I wanted to live by my words,” he says. “I talk to people about normalising mental health (Dani has facilitated Safe Space Sessions up and down the country during tours, alongside mental health professionals), so how can I write an album where I’m not talking about mental health? The normalisation of mental health is what saves lives. I want people to see the light in the dark. If they delve into that they can find solace in the discussion, the normalisation, the positive action by discussing this.”

Lyrically, there’s an apocalyptic feel to Cannibal. While tracks like Quake and Better Below go deep into Dani’s lowest moments, the album also explores the impact of social media on Gods And Machines as well as what he refers to as “society’s oppressive, horrific nature”.
“The term Cannibal refers to being eaten away by your own thoughts but also eaten away by other humans,” he explains. “We’re not kind to ourselves, let alone kind to each other.”

While Cannibal is very much Dani’s story lyrically and thematically, the rest of the band are also on the form of their lives. The title track is a clear nod back to the anthemia of Black Flame’s standout title-track and tracks like powerhouse opener Choke, The Grey (VIXI) and Imposter are classic Bury Tomorrow, metallic maelstroms of churning riffs and expansive choruses. Elsewhere though, the band have taken more risks than ever before, adding depth and shade to their ever-evolving sound. Quake ebbs and flows, swelling and simmering like a seething volcano and a techy edge cuts through the icy melody of Cold Sleep. And for all the album’s dark ruminations, atmospheric closer Dark Infinite ends on a melodic high, a surging soundscape which sounds like the band are ready to take on the world.

Work on Cannibal started almost immediately after the band released the deluxe version of Black Flame in June 2019 and was completed partly on the road. Soon after, the band headed to the studio, recording drums and rhythm guitars at Middle Farm studios, in South Devon, with the remainder of the album recorded at Vale studios in Worcestershire. Putting into practice the lessons they had learnt when making Black Flame, the band tore into, rewrote and scrapped any tracks that weren’t up to scratch.

While the process was far from easy and pushed the band musically and emotionally to their limit, there’s no doubt that this is their best and bravest album to date. Now 14 years into their career, Cannibal will be the album that takes Bury Tomorrow to even greater heights. 2020 will be their year.

“I want it to grow our fan base and capitalise what we did with Black Flame,” says Dani. “Black Flame connected with a lot of people. I want Cannibal to take us to a new part of our career. It’s a great starting point for a discussion, I’m excited for people to hear it.”

Tickets for Bury Tomorrow at The Underworld Camden - Re Scheduled can be booked here. 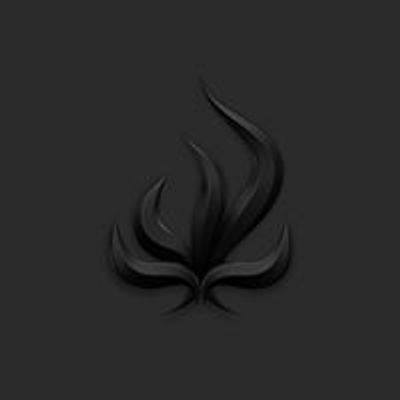