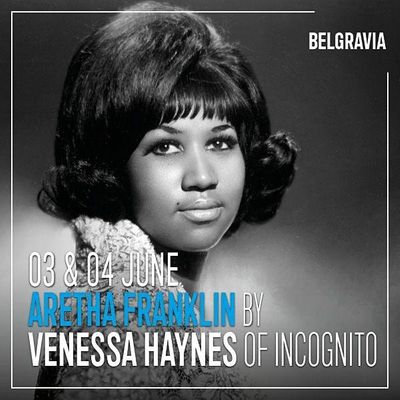 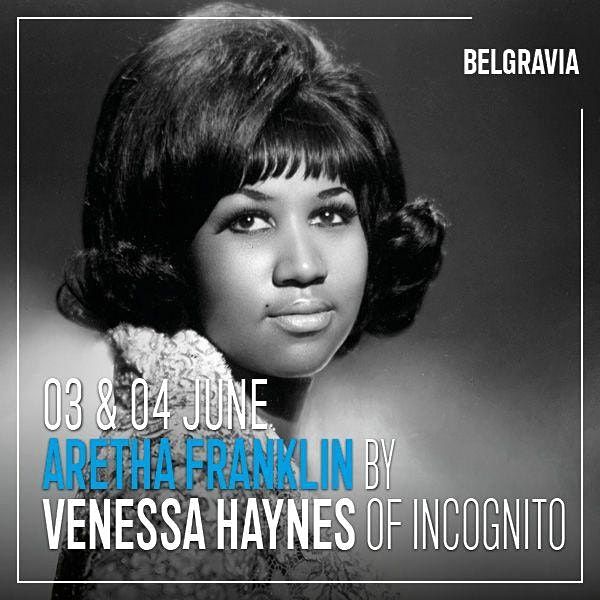 ‘Respect’, ‘I Say A Little Prayer’, ‘Bridge Over Troubled Water’, ‘Natural Woman’ and many more

Possessing one of the finest voices in contemporary British UK soul, Vanessa Haynes (Incognito) and her 5-piece band present a retrospective discography of music spanning several decades for this very special tribute that celebrates the life of the late and legendary Queen of Soul, Aretha Franklin (1942-2018).

The long-reigning and undisputed “Queen of Soul” known for her iconic “ R.E.S.P.E.C.T” song had passed away on 16 August 2018 at the age of 76, leaving an extraordinary legacy of timeless songs for generations. Aretha Franklin won 18 Grammys, had 17 Top Ten US chart hits and sold over 75 million records over a music career spanning six decades, making her one of the best-selling artists of all time.

Vanessa Haynes is a London-based singer/piano player who has been performing worldwide over 15 years. She became one of the lead singers of the internationally acclaimed UK jazz/funk band Incognito in late 2008. The band boasts 17 Studio Albums and 2 Top 20 Hits (Always There 1990), (Don’t You Worry ‘Bout A Thing 1992) and after 35 years is still touring today. In early 2008 Vanessa became a backing vocalist to Van Morrison, performing around the world with him. In 2012 she joined Chaka Khan on backing vocals for her UK/Europe Tour. She has worked and recorded with other notable artists including Anastacia, Mario Biondi, Goldie, Chaka Khan, LuLu, Billy Ocean, Dave Stewart and Leon Ware and more. Her solo album Stay With Me has received rave reviews, and produced the singles ‘Embrace’ and ‘I Wonder’. Vanessa is a lover of blues and jazz. Her solo album Stay With Me has received rave reviews and her stunning performance of Aretha Franklin's Ain't no Way this year at Cheltenham Festival with the Guy Barker Big Band and The BBC Concert Orchestra, received a standing ovation

Bar and heated Terrace available for pre or post-show drinks! Music, vibes and cocktails till 1am

*Please be aware upon booking, your table will be booked for 8.30pm. Should you wish to change your time, please contact reservations on info@ Boisdale.co.uk or call 02077306922.

Jools Holland is Patron of Music at Boisdale of Belgravia which was founded in 1989. It is a lively, warm and atmospheric restaurant with a number of spaces, including the atrium roofed Macdonald Bar and restaurant, the lovely Courtyard Garden, and the comfortable Cigar Terrace, Speakeasy Whisky Bar, three private dining rooms, live music every night, wonderful modern and classical British cuisine and a superb wine list. 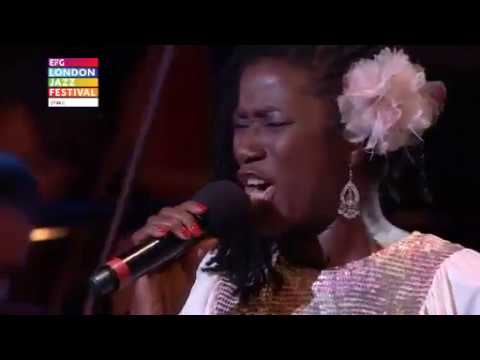 Tickets for Aretha Franklin by Vanessa Haynes of Incognito can be booked here.

Boisdale Restaurants
Follow Contact
About The Host: Ded­i­cat­ed to the fin­er things in life: Deli­cious food, fine wine & rare whisky, all set to the sound­track of the best in live Blues, Soul and Jazz music - Find us in four unique London locations.
Website Link: www.boisdale.co.uk
Are you the host?
Nearby Hotels Boisdale of Belgravia, 15 Eccleston Street, London, United Kingdom
Event details from Eventbrite Report a problem ?