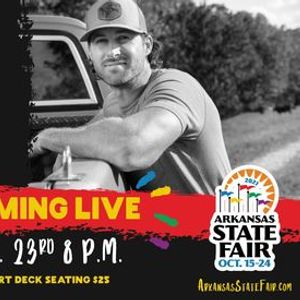 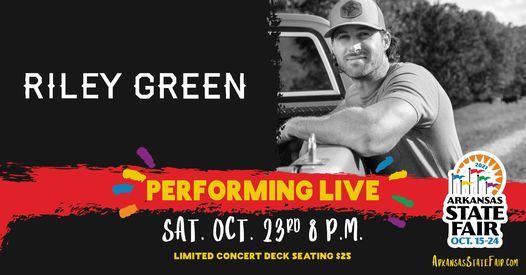 Catch Riley Green LIVE at the #ArkansasStateFair on Oct. 23rd at 8PM! Concert included with GA ticket or get LIMITED concert deck seating for $25! ? Click here to get yours now: https://bit.ly/38wvPKs

Don't miss out on this spectacular concert! #SeeYallThere?

Born in Jacksonville, Alabama, Riley Green was raised on the sounds of traditional Country, Bluegrass, and Southern Gospel music. ﻿His 2018 IN A TRUCK RIGHT NOW EP (BMLG Records) introduced his mixture of outlaw-rebellion and respect for tradition across his self-penned four tracks, including his debut No. 1 hit single “There Was This Girl.”

Rolling Stone Country, Taste of Country, Whiskey Riff, Sounds Like Nashville, and iHeartRadio among others have all named Riley an “Artist to Watch,” all while his OUTLAWS LIKE US TOUR was headlining, which included multiple sold-out stops.

Currently on the road with Brad Paisley’s 2019 WORLD TOUR this summer, he will next join Jon Pardi in the fall for his HEARTACHE MEDICATION Tour and then trek out on his own for his GET THAT MAN A BEER TOUR.

You may also like the following events from Arkansas State Fair:

Tickets for Riley Green LIVE! can be booked here.