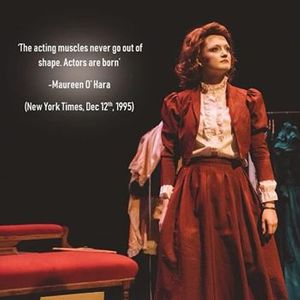 The 2020 national tour of Queen of Technicolor –The Story of Maureen O’ Hara celebrates 100 years of Maureen O’ Hara who was born on August 17th 1920.
Witness how Maureen O’ Hara navigated her way from humble Irish beginnings to reach the top of the Hollywood tree whilst remaining true to herself and steering clear of the dreaded casting couch. Within a stream of chronological and flashback scenes, O’ Dwyer portrays over twenty characters in this tour-de-force, taking you on an intimate journey with Maureen and revealing the real woman behind the limelight. The vanity case used in the show is the original case which belonged to Maureen O’ Hara.

You may also like the following events from Queen of Technicolor - The Story of Maureen O’ Hara: