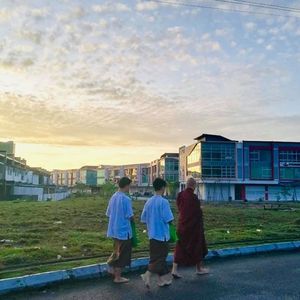 因搬遷故，每週托缽暫停。
As we're moving to a new premise, Pindacāra will resume until further notice.

IMPORTANT TO KNOW:
• When the monks are seen to be approaching, the person should kneel (or stand due to physically inconvenience), remove their footwear and hold the food above their head in an offering position and reflect on the meaning of the action about to take place. Place the foods directly into the monk's bowl without touching the monk. This is usually done in "noble silence," as going on alms round is a solemn practice for monks, and they do not engage in talking or chatting with others.
• Maintain a respectful distance and to place the food carefully and gently in the center of the bowl without touching or interfering with it in any way.
• You may offer any type of cooked food such as plain rice, vegetable dishes, meat dishes, cakes, or ripened fruits. Kindly wrap the food with suitable or reusable wrapping material, or place it in a clean container.
• Uncooked food such as packets of rice or dry noodles etc can be offered to the monastery but should not be placed into the monk’s bowl; it should be handed over to the monks’ attendant(s) known as kappiya in, instead.
• Monks do not accept uncooked meat, raw eggs or fish.
• Buddha forbid the monks to eat these ten kinds of meats which are: human flesh, dog, horse, elephant, leopard, tiger, lion, bear, hyena and snake.
• Requisites such as robes and medicine can be offered when the monks are at BPS 覺華學處.
• Give only what is appropriate, and do so voluntarily.
• Theravada monks only consume food between the break of dawn and noon. Therefore, they do not go about collecting alms after 12pm.
• Monks do not accept money. You may make a donation to Buddhist centres instead. Beware of ‘bogus monks’ going around offering amulets and trinkets for sale. Do not be fooled into buying from them, or into giving them money.
• During Pindacāra, the monks mindfully observe ‘noble silence’. Questions can be put to the bhikkhus later at BPS 覺華學處


Pindacāra, the practice of collecting alms-food, is observed by Theravada Buddhist monks who have gone forth from ‘home-life’ to ‘homelessness’. A Buddhist (male) monk is known in Pāli Language as a ‘bhikkhu’ – meaning ‘one who lives on alms’.

In Buddhist countries such as Thailand and Myanmar, it is a daily ritual for monks to go on Pindacāra, where they walk through a village from one household to another, allowing devotees to make food offerings. According to the teachings of the Buddha, there are two main purposes in going on alms round. The first concerns the monk, who in going is reminding himself to be humble; the other concerns the person offering alms, who in so doing is practicing generosity.

With Pindacāra, Buddhist monks need not worry about food and this afford them time to ponder and practise the Dhamma. Since the time of the Buddha, lay people have been supporting monks this way with robes, food, shelter and medicine. In return, monks provide guidance to the laity on Buddhist teachings, thus forging a close, respectful, and symbiotic relationship between the two communities.

The monk’s alms-bowl is only used to receive cooked food offered by willing donors. The monk strictly does not accept money with his bowl or on his alms-round.

Offering alms-food to monks allow lay people to acquire merits as a result of their kind intentions and actions. Doing good deeds daily is a way of self-cultivation and to live a noble way of life. The proper way for the laity to offer alms is to perform it joyfully, mindfully, and respectfully towards the monk(s).

In Samyutta Nikaya, the Udaya Sutta in the Brahmana Samyutta collection, in it, we are told that the Buddha went to the house of a brahmin named Udaya on his early morning alms-round. The brahmin was happy to see him and put food in the Buddha’s bowl. On the second occasion, Udaya repeated his offering. On the third time, he was annoyed when he saw the Buddha and commented, “This pesky ascetic Gotama keeps coming again and again.”

When the brahmin heard this he was pleased and took refuge in the Buddha, Dhamma and Sangha for life.

Monks do not only give you a chance to gain merits. A monk who is properly trained and who understands and practises the Vinaya rules is a good field of merits, as opposed to one who is an impostor and exploits you for his own selfish ends. A monk depends on his supporters for his sustenance. His basic responsibility is to perfect his sila so that his supporters receive great merits.

On top of this, when he purifies his mind through meditation, his field of merits is better. Then when he studies and gains knowledge, he can help devotees to put Buddhist principles into practice as well as teach them meditation. There are many temples around as well as monks to perform rites and rituals. Buddhists should not rest content on just rites and rituals but should learn more about Dhamma to improve their lives.

You may also like the following events from BPS 覺華學處: 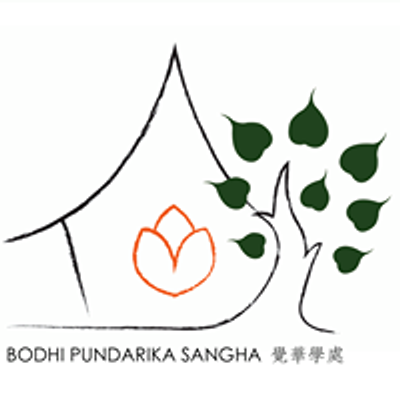