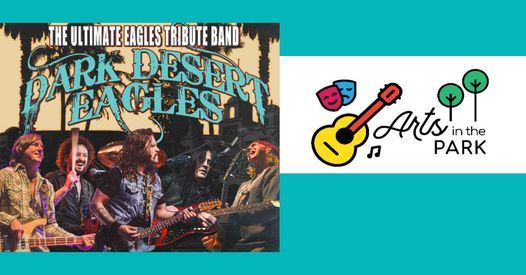 Touched by the passing of Eagles co-founder Glenn Frey, Pat Badger (an original member of the multi-platinum rock act Extreme) set out to form the @[518611205507605:844:Dark Desert Eagles - Ultimate Eagles Tribute Band]. Badger is an enormous fan of The Eagles’ musicianship, vocal harmonies and timeless repertoire.
Each of the musicians in the Dark Desert Eagles painstakingly re-creates the amazing soaring harmonies and music of The Eagles!

For fans of The Eagles who long for the LIVE re-creation of some of the greatest hits of a generation, the Dark Desert Eagles are the Ultimate Tribute to The Eagles. Songs such as “Take It Easy”, “Witchy Woman”, “Peaceful Easy Feeling”. “Desperado”, “Tequila Sunrise”, “Already Gone”, “One of These Nights”, “Lyin’ Eyes”, “Take It to the Limit”, “Hotel California”, and several gems from the Eagles’ members solo careers are masterfully re-created during a live show of the Dark Desert Eagles.

This event will feature exhibits and performances by local art organizations and museum concert series.

Tickets $20 at the gate. RFA Early Subscribers $15.
Children under 12 and students with student ID FREE.

You may also like the following events from Kilmarnock Town Centre Park: