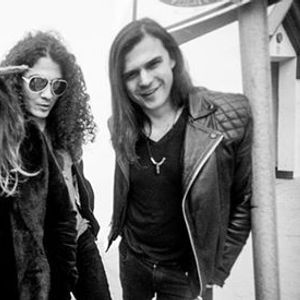 The Los Angeles quartet is indeed a rock 'n' roll band, straight up and with no apologies or explanations needed -- and a fan base that includes Guns N' Roses, Slash & the Conspirators, and The Who, all of whom have tapped Dirty Honey to open for them. The five songs on the group's self-titled debut EP are filled with everything that's real rock fans love -- meaty melodies, explosive dynamics, grooves as tight as a sealed envelope, vocals that bellow across the ice and snow of Valhalla and guitar riffs that come at you like a heavyweight haymakers. Spend 20 minutes with Dirty Honey, and you'll find yourself asking, sincerely, "Please sir, may I have another..."

"We've been able to identify what speaks most honestly to us, which is what you hear on (the EP)," notes guitarist Notto. "What we do is from the prime-time vinyl era -- the 70s and maybe a touch of early 80s, and 90s, with some modern stuff as well. And over the past couple of years of hard gigging, Dirty Honey has found it’s not alone in craving that kind of music.

"Millennials have been starved of truly great rock music for a long time," says front man Marc LaBelle. "At some point, EDM and hip-hop isn't the new thing anymore and what's fresh again now is rock. Every day walking around L.A. you'll see dozens of T-shirts with Zeppelin, the Who, the Stones and Beatles logo. Rock 'n' roll will never die -- thought it might take a nap for a few years here and there." Drummer Corey Coverstone, meanwhile, comes straight to the point, adding, "It's been missing for a long time. People want it. We want to give it to them."

Rest assured that the members of Dirty Honey -- LaBelle, Notto, Coverstone and bassist Justin Smolian -- were rockers before they came together during 2017. LaBelle and Notto met when the guitarist sat in with a cover band the singer was playing in at the time. "Our drummer invited him to play guitar on a couple of tunes, and I immediately decided he was a more appropriate person to pursue a band career with than the guys I was doing it with at the time -- and I was fortunate enough that he agreed," LaBelle recalls. Notto adds that "We could both tell our love of rock 'n' roll was the same," and after a tenure playing covers and "writing tunes on the side," the pair hit on Dirty Honey's first single, "When I'm Gone" -- "More or less about my personal experience and struggle living in L.A.," LaBelle says -- and saw the path ahead of them.

Smolian came into the ranks early after he was introduced to Notto via fellow musical friends. Finding a drummer was more problematic, but when Smolian brought Coverstone into the mix, Dirty Honey was complete. "He was exactly the level of player we were looking for," Notto recalls.

"Once our now manager heard the professional demo of 'When I'm Gone' and wanted to sign us, we knew that was the direction," Notto says. "It felt right, too, because particularly for me bluesy, big riff rock has always been home base. It's just how I naturally play guitar."

Their manager connected them with producer Nick DiDia (Rage Against the Machine, Pearl Jam) and the band traveled to Australia to begin working at his studio in scenic Byron Bay, Australia.

"It was an absolute paradise recording location that supplied ample mental freedom from our regular daily lives," Notto says. "It truly was a retreat. And Nick really understood where we were at as artists, as well as where he could tell we wanted to end up."

"We are all rockers at heart," Smolian says, "but we also draw from funk, R&B, blues, jazz and classical music. Most importantly we try to have each member let his unique personality come through the music." That blend can certainly be heard on the Dirty Honey EP, which runs from the riffy crunch of "When I'm Gone" to the slinky blues of "Rolling 7s" -- one the rhythm section particularly favors -- and the Seattle flavor of "Heartbreaker." "Down the Road" boasts a big, bluesy heart, while "Scars" builds into a stomping slab of power rock.

The group has continued to mine its reputation as a cranking live act, both on its own and supporting major names as well as at festivals such as Sonic Temple, Welcome to Rockville, Rocklahoma, Heavy MTL, Epicenter and the Impact Festival.

Dirty Honey is both a destination and a beginning for the band. Mostly, however, it's a the first of what Dirty Honey hopes will be many declarations of rock 'n' roll prowess and creative intent, forging a fresh path from familiar conventions.

"We want to be as big as Aerosmith and the Black Keys and AC/DC one day," LaBelle says. “Additionally, we want the band to grow to a place where Dirty Honey is just its own identity, like all of our predecessors." Notto concurs, adding that, "we want to be a band that stands out as unique, memorable, and timeless. We want our live shows to be MORE than the record. And we want to push it to the edge every chance we get."

You may also like the following events from The Amazons:

Get Tickets
Tickets from USD 15 to 69 on eventbrite.com