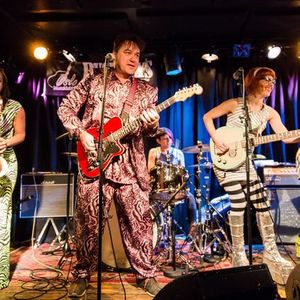 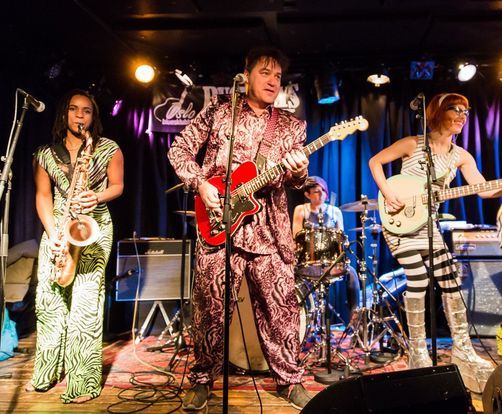 If Igor and Red Elvises aren’t in the middle of a tour, they are getting ready for the next one – this is a group that is constantly in motion and consistently evolving. Singer, songwriter, guitarist and showman extraordinaire Igor Yuzov is perpetually globetrotting and in the process he has found scores of wildly talented, entertaining musicians to bring into the fold of this increasingly international party band.
Red Elvises started as a Russian group, playing what they dubbed “Siberian Surf Rock”. Since then the band has included musicians from many other countries including United States, Israel, Puerto Rico and Bulgaria, to name just a few. Everyone who performs with them for any length of time brings something different both energetically and musically. At various times shows have included keyboards, accordions, sax, clarinet, trumpet, flute, banjo, mandolin, tuba and many other instruments. Old and new fans alike can expect to be surprised at shows again and again, however the roots of Red Elvises remain the same: Igor’s unique brand of humor combined with guitar based rock’n’roll that makes audiences want to sing, dance, scream and shout.

Advance Tickets are Available and Recommended:

9 pm Igor and the Red Elvises

You may also like the following events from The Continental Club, Houston, TX:

Tickets for Igor and the Red Elvises – Siberian Rock n Roll can be booked here.