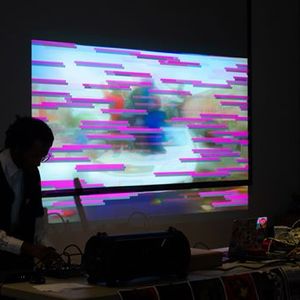 Join Devin Kenny for a performance essay (involving live music, video, video synthesis, and analog visual aids) bouncing off of the legendary oeuvre of DJ Screw in relationship to cumbias rebajadas for the exhibition Slowed and Throwed. Kenny will touch on the social and philosophical resonances that accompany these genres, with attention towards their ripple effects which reach the present and continue on into the future.

Learn more about the exhibition: https://camh.org/event/slowed-and-throwed/

About Devin Kenny
Devin Kenny is an interdisciplinary artist, writer, musician, and independent curator living in Houston, Texas. Hailing from the South Side of Chicago, Illinois, he relocated to New York, New York to begin his studies at The Cooper Union. He has since continued his practice through the Bruce High Quality Foundation University (Brooklyn, New York), Skowhegan School of Painting and Sculpture (Madison, Maine), SOMA Mexico (Mexico City), and the Whitney Independent Study Program (New York, New York), doing collaborations with Triple Canopy, Rhizome, Studio Workout, Temporary Agency and various art and music venues in New York, New York; Chicago, Illinois; Los Angeles California, and elsewhere including: The Kitchen, Recess, Het Roode Bioscoop, REDCAT, MoMA PS1, Freak City, and Performance Space. He received his MFA in 2013 from the New Genres department at the University of California, Los Angeles and is a current fellow at The Museum of Fine Arts, Houston’s Core Program.