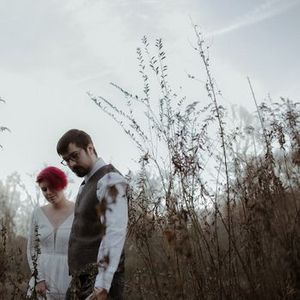 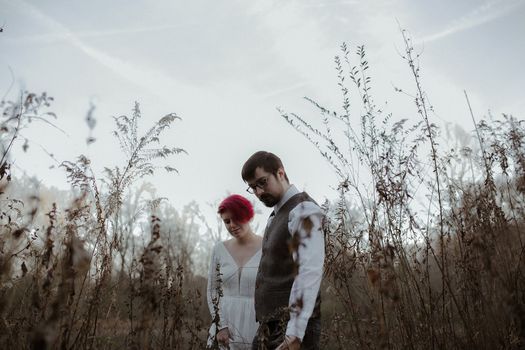 For fans of: The Civil Wars, Gregory Alan Isakov, The Lumineers, The Secret Sisters, Brandi Carlile

"Take a cup of orchestrated folk, sprinkle in some angelic harmonies, and pour in full-bodied production and you get the earthy joy of this Nashville duo." -Glide Magazine

Nashville duo Haunted Like Human delves into inspired songwriting, sparse arrangements, and frisson-inducing harmonies that mark their music. With a background in poetry and prose, Dale Chapman's granular focus on language is simpatico with Cody Clark’s background in classical guitar, where each note carries its own weight. Limned with nostalgia, soaked in Southern gothic lore, the duo meticulously assembles songs to preserve the spirit of the stories they tell.

Listen to their music here: https://linktr.ee/hauntedlikehuman

The Whiskey Charmers is a Detroit-based Alt Country band led by Carrie Shepard and Lawrence Daversa. Fans have often compared their sound to riding through the desert with the top down, or the feeling of being in some lonesome smoky bar off the side of an abandoned highway, or music from a Spaghetti Western.

Tickets for Haunted Like Human (Nashville, TN) w/ The Whiskey Charmers at The Park Theatre can be booked here.

Haunted Like Human
Follow Contact
About The Host: Nashville-based duo Haunted Like Human is a marriage of diverse backgrounds to bring a distinct indie/folk voice. There is little that Oregon native Cody Clark hasn’t played. The guitar player holds a degree in music composition and has played everything from post-hardcore to jazz. Dale Chapman grew up in Georgia writing prose and poetry, and she brought her strong imagery and storytelling into her music. Through their myriad of influences, the two strive to create an intimate listening experience for their audience. After meeting in April and having a successful cowriting session, the two jumped in head first. Over the few months they’ve known each other, they have put together three short tours and written and recorded a twelve song album. Their debut album, Ghost Stories, is the product of the stories they've collected over the years.
Website Link: hauntedlikehuman.com
Are you the host?
Nearby Hotels Park Theatre, 248 S. River Ave, Holland, United States
Report a problem ?