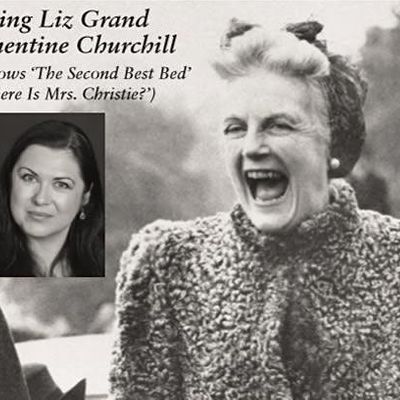 Mrs. Churchill My Life With Winston

Sir Winston Churchill was recently voted No. 1 in the top 100 Britons of all time by a nationwide poll of over a million voters. The epitome of strength, stubbornness and the British bulldog, his inspirational leadership helped win the Second World War, and his parliamentary career ensure that he was responsible for many of the momentous decisions which helped shape this 'sceptre isle'. He was an MP for 62 years.

They say that behind every great man, there is a great woman. Was this true in Churchill's case? What of Clementine, his wife for 56 years? Did he bully her like he did so many other people? Was he as grumpy and irascible at home as he often was in the House of Commons? Given his strength and conviction, did Clem have any influence on him at all? Or was she the 'little lady at home'?

All these questions will be answered, and many more, in Liz Grand's superb, moving, sensitive and informative portrayal of Clementine Churchill. This was one of the great love affairs of all time, no better illustrated than Winston saying, "My most brilliant achievement was my ability to be able to persuade my wife to marry me."

Tickets for HenleyArts4All 2023 Mrs Churchill - My Life with Winston can be booked here.

Event Photos
There is no photo available at this moment
Hosted by
HENLEY IN ARDEN GUILD HALL TRUST
Follow Contact
(REGISTERED CHARITY NUMBER 219520) We are an independent, not-for-profit charity committed to enriching the cultural life of              Henley-in-Arden and further afield. All your support - from ticket sales, donations and membership fees to room hire and refreshment sales helps to fund the Guild Hall Trust. This includes our own programme of indoor and outdoor live perfomance, community events, historical enactments and learning opportunities as well as taking care of the Guild Hall buildings and gardens so that they can be enjoyed today and for generations to come.
Are you the host?
Nearby Hotels Henley-in-Arden Memorial Hall, Station Road, Henley-in-Arden, United Kingdom
Event details from Eventbrite Report a problem ?