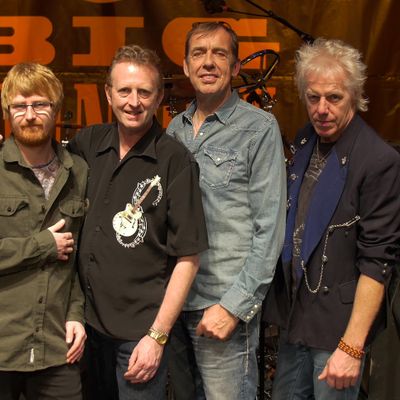 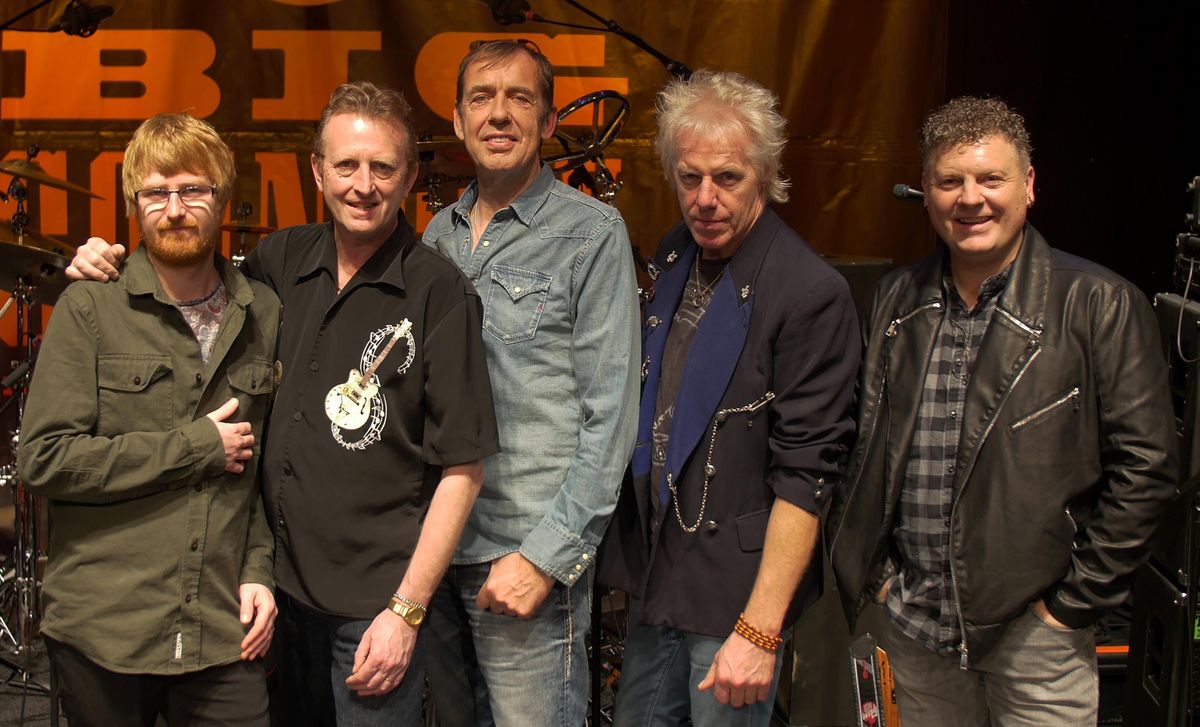 Big Country was originally formed in 1981 by guitar playing founder members Stuart Adamson and Bruce Watson both native of the band’s hometown Dunfermline in Scotland.

Initially driven by a shared vision of widescreen guitar melody, harmony and lyric, the classic Big Country sound was further enhanced later that summer by the arrival of drummer Mark Brzezicki and bass player Tony Butler. This is the Big Country that (with producer Steve Lillywhite), recorded the classic debut album ‘The Crossing’ in 1983.

The band broke massively worldwide with the release of the album’s classic singles ‘Fields Of Fire’, ‘Chance’ and signature song ‘In A Big Country’, which went on to become massive worldwide hits, selling over 2 million copies and driving ‘The Crossing’ to 3 prestigious Grammy nominations in the USA.

The run of success continued throughout the 1980′s with the release of the anthemic single ‘Wonderland’ and the second album ‘Steeltown’ (1984), which debuted at Number 1 in the UK and contained the hit singles ‘East Of Eden, ‘Just a Shadow’ and ‘Where The Rose Is Sown’ . In 1985, Big Country appeared at Live Aid in London followed by further successful album releases ‘The Seer’ (1986, which included the bands biggest UK hit ‘Look Away’, which also reached Number 1 in the Irish Singles chart) and ‘Peace In Our Time’ (1988), which saw the band playing the first ever privately promoted gig in Russia at the Moscow Sports Stadium.

At the start of the 90’s ‘Through A Big Country’, featuring all the bands classic hits was released, followed by the fifth studio album ‘No Place Like Home’ (1991) taking the band’s total record sales to well over five million copies.

Further studio albums Buffalo Skinners (1993) and ‘Why The Long Face (1995) followed, which saw Big Country landing the special guest slot on the Rolling Stones ‘Voodoo Lounge’ European tour and several shows in the UK and Ireland with Led Zeppelin’s Jimmy Page and Robert Plant in 1995.

In August 1998 they were once again invited to open for the Rolling Stones on their ‘Bridges To Babylon” tour of Europe prompting Mick Jagger to say that Big Country were “one of the best opening bands we ever had”.

Two songs written at that time (‘Somebody Else’ and ‘Devil In The Eye’) were co-written with Ray Davies of The Kinks who invited the band to back him on the main stage at Glastonbury to perform a storming set in the rain.

By now singer Stuart Adamson had relocated to Nashville, Tennessee and so his fellow bandmates decamped to America to join him in writing and recording the album ‘Driving To Damascus’. It would be the last album they recorded together. With Stuart at the helm, Big Country, scored 17 top 30 UK singles achieving 5 gold and platinum status albums along the way. Stuart and Big Country would tour Europe one final time in 2000 and on the closing night at their beloved Barrowlands in Glasgow the band were fatefully joined on stage for one last song by Alarm singer Mike Peters and Bruce Watson’s son Jamie on guitar.

On December 16th 2001, Stuart Adamson took his own life in Honolulu, USA. He is survived by his children Callum and Kirsten. A celebration of Stuart’s life was held at Glasgow Barrowlands in May 2002 featuring the remaining members of Big Country with special guest vocalists including Mike Peters who would also sing with the band at a fan club convention in Zaandam, Holland.

The remaining three members had no real thoughts of performing as Big Country again. But, Tony Butler, Mark Brzezicki and Bruce Watson re-united in 2007 to celebrate the band’s Twenty-fifth anniversary. “It wasn’t a come-back… it was just the three of us having fun, as friends and as a band, and hoping to give the fans some enjoyment by playing our songs live, to celebrate 25 years” – Bruce Watson

In the summer of 2010, Bruce Watson finally picked up the phone and asked Mike Peters to do what he had previously been reluctant to do and sing with Big Country officially. In order to celebrate 30 years since the band was formed, Mike (a longstanding friend of Stuart’s who credits the words of ‘In A Big Country’ as literally inspiring him to ‘Stay Alive’ through two very public cancer battles), instinctively agreed and dates were booked. The first was fittingly in Glasgow, Scotland on New Years Eve 2010 and the second in the band’s hometown of Dunfermline. There was instant chemistry with the band also being joined by Bruce Watson’s son Jamie on guitar as Big Country again sought solace in the music and the freedom to express their love and admiration for their departed friend Stuart Adamson (who’s usual space at the centre of the stage was left symbolically vacant).

“When we are playing it is as if we never stopped, but I know we have, I know we suffered a great loss. But you heal . . . slowly. I can assure you that Stuart will be there with us every night, in our thoughts, in our words, and in our hearts. And now we find ourselves maybe not fully healed, but whole enough to hear the calling to continue this story. And time has made me realise that this story has always been about our fans, the love we have for our fans, and the love they have selflessly given us back.” – Bruce Watson

“When Bruce Watson called and asked me to sing for Big Country it was something I didn’t need to think twice about. It’s been an incredible honour getting to know the music of Big Country intimately and a pleasure to be around such great musicians and fans alike. I find singing the lyrics of Stuart Adamson very life affirming” – Mike Peters

Two years of intense and emotional shows followed with the ‘new’ Big Country fuelled by a renewed energy and once again revelling in the dreams and visions that had brought them together in the first place, finding instant and respectful acceptance by fans and critics alike. Since then, the band have performed at many of the UK and Europe’s most famous festivals, including Isle Of Wight (Twice), V Festival, T In The Park, Oxegen, Pink Pop and Cropredy creating a new generation of fans and renewing the passion for diehards with the introduction of new original songs such as ‘Another Country’ and ‘The Journey’ which encapsulate not only the sound but the heart and soul of Big Country past, present and future.

With the promise of a new era dawning for the band and the realisation that Big Country now have the platform to once again record and tour on a world wide scale, bassist Tony Butler has decided that his time in Big Country has come to a close and so he has retired gracefully from the stage. The band now welcomes Scott Whitley on bass.

In April 2013, Big Country released The Journey and toured across the globe in support of this highly acclaimed album throughout the year.

Coming into 2014, new challenges arose for Big Country. With Mike Peters dedicating his efforts full-time towards the support of the 30th Anniversary of The Alarm’s Declaration, Big Country have been joined by Simon Hough to perform vocal duties. He has fit in perfectly as the band continues its touring throughout the year that Big Country celebrated the 30th Anniversary of the release of the album, ‘Steeltown’. 2015 sees a massive Best Of (and more) tour of the UK and Europe, during which, Scott Whitley joined the band on bass, following Derek’s departure after 3 years. With 2016 comes the 30th Anniversary of ‘The Seer’ with the album being performed in its entirety on tour.

You may also like the following events from Cafe De Cactus Muziekcafe, Kleinste Podium van Twente: 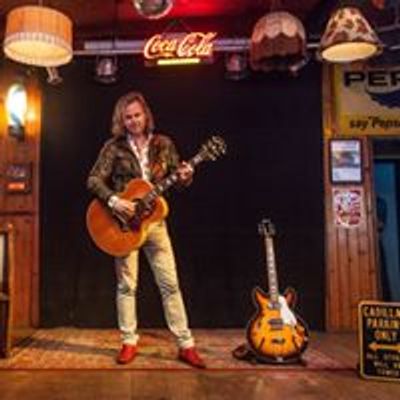