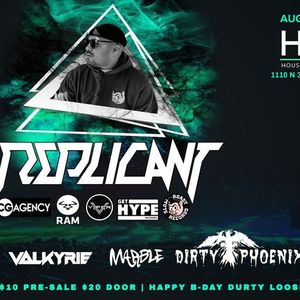 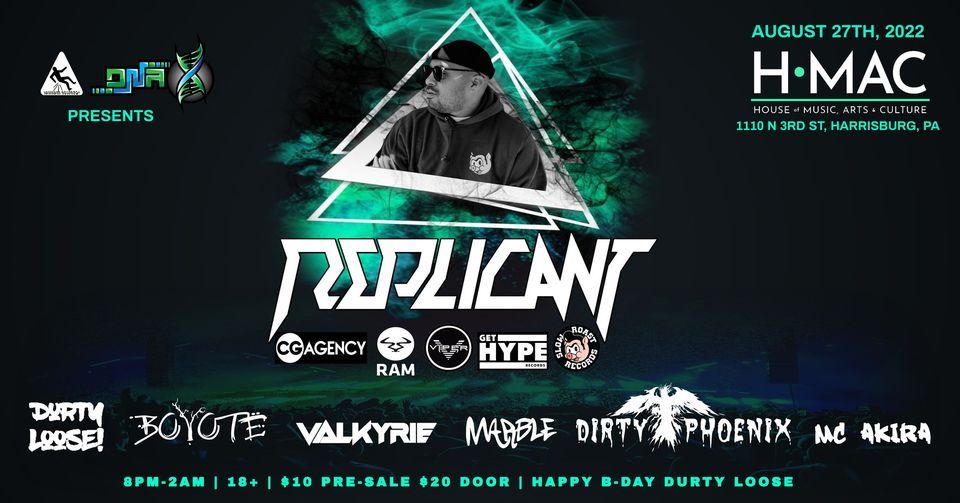 Butthurt Records and DNA Productions is so excited to be bringing you a night of Drum N Bass with a stacked line-up featuring REPLICANT.

We are also thrilled to be celebrating some special August birthdays. The boss man, himself, Robert Ritenour aka Durty Loose and our friend, the incomparable, Melissa Fezell. These Leos bring so much light to our world and we all know how much they love their DnB!

Whether it be the undeniable push of radical self expression, or the product of a lifetime of studying the deepest compounds of the underground paired with an organic obsession of the 174 genre, Los Angeles native Replicant
has become discipline encapsulate.

Through a deeply rooted upbringing inspired by critically acclaimed pioneers such as DJ Craze, Roni Size, and DJ Die, Steve has carefully carved his name into the walls of drum and bass
history etched between its founding fathers and the new generation.
With a nonconformist sound that tears the very fabric of an otherwise convoluted soundscape, this technical maverick of a producer has begun to tell the next chapter of his story - one release at a time.

Rejuvenating the roots of a once experimental sound, Replicant has received worldwide support from groundbreaking artists such as High Contrast, Noisia, Dillinja, and many more.
Carefully fusing modernized sound design with brick and mortar elements of a junglist’s ode to the past, Steve Replicant has brought forth a niche sound that is immediately recognizable
from the introduction.

With collaborators including internationally-acclaimed talents such as Bou, Bass Brothers, DJ Profile, and many more, this exciting artist has annihilated stages across America with no holds barred. Through a montage of releases
with record labels ranging from
Get Hype, Slow Roast, to Viper Recordings, Replicant has showcased a diversified variety of sound while simultaneously maintaining a signature style.

With the perfect parallel of raw energy and an insatiable sense of introspection,
Replicant’s sound has turned international attention to America’s own drum and bass Mecca–Los Angeles. As the pages turn and idea becomes anthem, some of us...have truly only just begun.

Tickets for REPLICANT - A NIGHT OF DRUM N BASS! can be booked here.