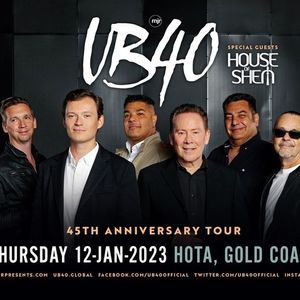 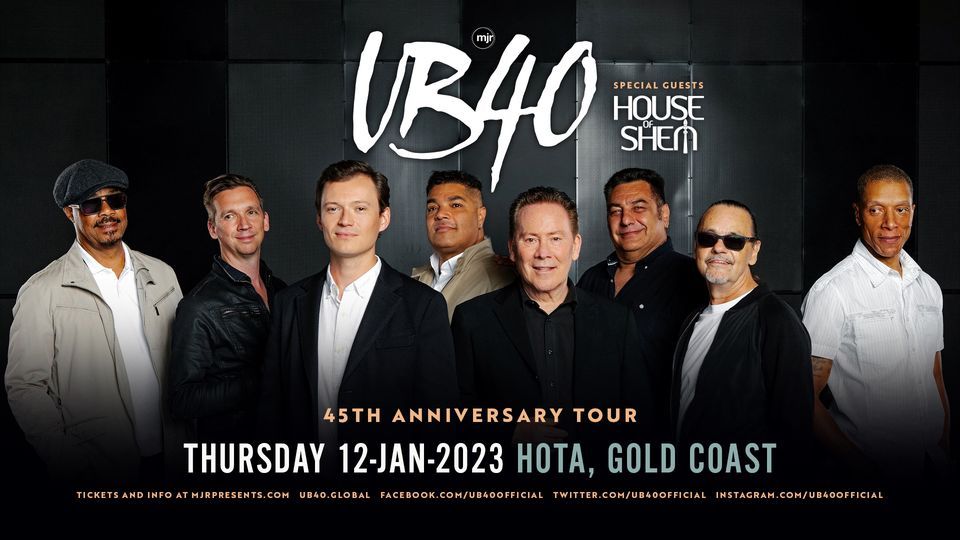 Due to unforeseen circumstances, UB40’s Australian tour will be rescheduled to the dates below in January 2023.

All ticket holders that can make the date simply need to keep their current ticket as they will remain valid. Any ticket holders who can’t make the new date can request a refund from their ticket provider before 29th June 2022.

We appreciate everyone holding on to their tickets just a little longer, as we know it’s worth the wait!

************
The UK’s most successful reggae band, UB40 have announced that, due to travel restrictions and for the safety of fans, band members and their crew, their eagerly anticipated return to Australia will be pushed back until next year.

Originally set to tour Australia in October as part of their 40th anniversary, and to perform hits from their latest release ‘For The Many’, it is with regret that UB40’s Australian tour now joins a growing list of international acts that have been forced to postpone.

Despite the many unknowns in international touring, UB40 are staying optimistic, and have locked in April / May 2021 as a return date for their return to Australian shores.

“We always look forward to trips down under, but we know it’s only a temporary delay, we will be back. Said the band in a statement today “The most important thing is that we all stay safe and we’ll see you on the other side of this ordeal.”

This also follows the news of UB40’s lead singer Duncan Campbell, who suffered a stroke in August. He is still recovering but is showing good signs of a strong and speedy recovery. Robin adds “It was obviously a shock and very worrying when we heard about Duncan having his stroke, but he’s having a well deserved rest and continues to recover at home”.

For those that have managed to score passes to the band’s Australian tour, tickets will still remain valid for all upcoming shows. Australian tour promoters MJR Presents have encouraged all ticket holders to hang on to their tickets, in order to continue supporting the live music industry.

“We strongly encourage all ticket holders to hang on to their tickets, not just to this show, but to all upcoming tours they’ve had their hearts set on” said MJR Presents director Scott Mesiti “Keep them on your fridge, or your calendar or your desk as a simple reminder that we’ll get through this, and when we come out the other side, there’s going to be some amazing live music waiting for us.”


The ‘40th Anniversary For The Many Tour’ will offer audiences a taste of classic hits like ‘Red Red Wine’, ‘I Got You Babe’ and ‘Falling In Love With You’, as well as tracks from the latest release ‘For The Many’ which will performed live in Australia for the first time.Jimmy Brown said, “For The Many’ is our first original album with Duncan, and a true reflection of where the band are at right now.
"It gave us an opportunity to go back to our roots and draw on the 1970s-style reggae that inspired us to be in a band in the first place. We intended to make an uncompromising reggae album and I think we have achieved that. There's lots of dub, various guest toasters and a blend of love songs and political songs. I'm really happy with the final result. We’re really looking forward to playing some of these tunes live on our 40th anniversary tour”

Becoming a household name around the world throughout the 80s and 90s, UB40 (named after the UK’s unemployment benefit form) became known for reviving reggae across the world, filling the charts with their own songs and creating seminal versions of some of the world’s greatest tunes, crossing radio formats and continuing to dominate the airwaves to this day. With over forty top 40 hits in their native Britain and sales of over 100 million records, the band – who recently celebrated 40 years together - are one of the biggest UK music acts of all time, and continue to record charting albums while touring across the world including regular trips to Australia where they have firmly found a place in the hearts of fans. After four decades of success including their hit singles, international stadium tours and festival headline slots the band continue with their key founding members and songwriting core, staying true to and building on the legacy and ethos of the band.

Tickets for UB40’s Australian tour are on sale now.

You may also like the following events from UB40: