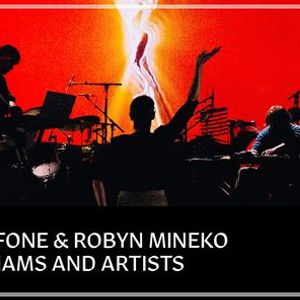 Califone & Robyn Mineko Williams and Artists 'In The Round'@ Thalia Hall

Califone and Robyn Mineko Williams and Artists come together for a special in the round performance of their acclaimed collaboration, Echo Mine. Echo Mine was inspired by and created alongside Williams’ longtime mentor, Chicago dance icon and founding Hubbard Street dancer Claire Bataille. “The five-minute solo for Claire that we made together serves as the source material, the heartbeat, of Echo Mine,” says Williams. Bataille was diagnosed with pancreatic cancer one month after their first rehearsal in October 2017. Before her untimely death in 2018, Bataille encouraged the piece’s completion. The resulting work is a dreamlike memoir and meditation on themes of lineage, legacy, loss and hope.

You may also like the following events from Thalia Hall:

Tickets for Califone & Robyn Mineko Williams and Artists 'In The Round' @ Thalia Hall can be booked here.

Thalia Hall
Follow Contact
About The Host: Thalia Hall – Faber and Pagels, architects Commissioned 1892 – John Dusek Landmark designation 10/25/1989 Thalia Hall is a historic landmark located in the Pilsen neighborhood of Chicago. In September 2013, owners Bruce Finkelman [Beauty Bar, Bite, Empty Bottle, EBP, Longman & Eagle] and Craig Golden [Longman & Eagle, Space, Union] will launch three new concepts within this storied property: a re-established beer inspired restaurant, a Punch focused cocktail bar, and a public hall fit for all types of events. Thalia Hall was founded by John Dusek at the turn of the century as a neighborhood establishment. Dusek was a family man, a tavern owner, and a facilitator of the arts. He was a visionary, and the founding father of Thalia Hall. His hope for the corner of 18th & Allport was to build a public hall for the community. In 1892 his dream became reality: a multi-purpose property that would offer commercial storefronts, residential housing, and a hall for the community. John Dusek built Thalia Hall with the hopes of bringing arts and entertainment from Bohemia to play for his bohemian neighbors. Architects Faber & Pagel, who modeled the hall after the Prague opera house, completed the public hall in 1892. For over 7 decades the Hall was a beacon of the neighborhood community. Thalia existed as one of the most ornate theaters of its times. This opulence, which differentiated it from more traditional interior theaters, was granted landmark status in 1989. The hall was used not only to house a multitude of entertainment over the years, but was also used as a central meeting spot for the neighborhood. In 1915, the hall was used to draft a bill paving the way for bohemian statehood and the birth of Czechoslovakia in 1918. Closed to the Public in the 1960′s, Thalia Hall has remained virtually untouched until the end of 2013, when we first began working on it. Our goal is to restore Thalia to its original charm and character, to breath life into this community treasure, and to bring a wide array of music, community, and artistic events to the neighborhood it serves.
Website Link: http://thaliahallchicago.com/
Are you the host?
Nearby Hotels Thalia Hall, Forest Park, United States
Report a problem ?