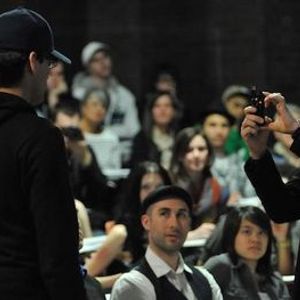 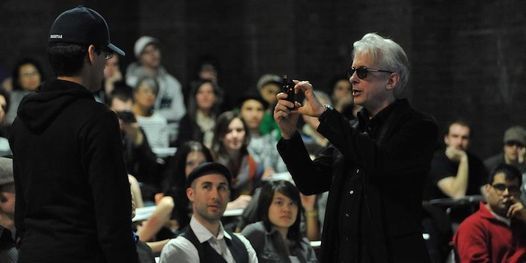 All the tools you need to establish yourself as a screenwriter, director, producer or filmmaker in one intensive day

Welcome to Raindance
Welcome to Saturday Film School
Welcome to disruptive filmmaking
Saturday Film School has launched the careers of hundreds of British independent filmmakers. The techniques and tools described in this information-packed day are the ones used by filmmakers like Edgar Wright and Christopher Nolan. It has been taken by over 15,000 filmmakers and screenwriters worldwide.
About the Course
The information-packed Saturday Film School will give you the tools you need to establish yourself as a screenwriter, director, producer or filmmaker. Divided into 4 parts, this course starts at the very beginning with Writing the Screenplay before explaining the processes, tools and jobs of actually Making the Movie for whatever budget you can achieve.
After lunch, veteran screen and stage director Patrick Tucker takes the stage to ask So You Want To Direct ? His entertaining and revealing session will uncover some of the secrets behind framing and directing actors, followed by Raindance founder Elliot Grove explaining how to Break Into the Film Industry , touching on CVs, pitching, negotiating and personal branding.
"The speakers were amazing. They know their stuff and because of this they immediately put you at ease. The course was fun, engaging and informative. I learnt something new every minute, I just couldn’t get enough! If you’re looking for inspiration, look no further than Raindance. It’s the gift from the Gods! "- Stephen Rae
Who is it for?
The Saturday Film School is the ideal class for anyone wanting to get to know the film industry, whether they have previous experience or not. Taken by thousands of students around the world, it’s Europe’s most popular filmmaking class. At our classes we regularly see:
-Passionate young newcomers looking to break into the film industry
-Interested fans coming to see what it’s all about
-Independent filmmakers seeking inspiration and clarification
-Film Industry professionals looking for a new direction
-Other industry professionals hoping for a new career!
This event is aimed at adult audience. Under 16s must be accompanied by paying adults
"The relaxed atmosphere and the welcome from the tutors. It was a very encouraging and inspiring day with lots of helpful hints and tips and I did not want to leave at all!" - Lorraine Briggs
What will I get?
Every attendant is provided with a 16-page handout containing filmmaking tips, tricks, resources and more. The day after each participant will receive a followup email with additional links to valuable information about movies and filmmaking.
10:00 – 11:30am Writing The Screenplay with Elliot Grove
Have you ever had an idea for a movie?
Let Elliot Grove help you get that idea onto the page by explaining to you the basic principles of writing screenplays, and demonstrating the powerful storytelling tools used by the professionals.
-Finding an idea
-Creating memorable characters
-Playing with story structure
-Copyright and legal basics
-How movies are bought and sold
"Elliot Grove. The fact that he presented the course himself and didn’t send his deputy. I like his non-nonsense, myth-breaking approach, and his geniune encouragement for new filmakers to just get in there and just do it." - Sharon Coote
11:45 – 1:00pm Making the movie with Elliot Grove
Making movies is not complicated. It is hard work.
We tell you how movies are produced and will give dozens of shooting tips that will save you money and make it easier to get your movie made.
-Creating a budget
-Choosing a camera
-Shooting on locations
-Securing permissions for shooting in public
-Guerilla filmmaking
"The Saturday film school course was practical, engaging, honest and encouraging. Conveyed with openness and a nice sprinkling of humour. Speakers interacted well with the audience, providing a clear emphasis on collaboration and utilization of skills within the room. I’d say it was the perfect intro. I’ll be back… and better than before!" - Deborah Ghayas
1:00 – 2:00pm Lunch
2:00 – 3:45pm So you want to direct? with Simon Hunter
Why is it that everyone want to direct, but no one ever takes the time to learn how?
Our tutor Simon Hunter is a veteran of the British film industry and will outline the principle basics of directing, and how to get the actors and crew to do what you want.
-Basics of film directing
-Crossing the line
-Camera placement and why it is important
-Communicating with your cast and crew
4:00 – 5:00pm Breaking Into the film industry with Elliot Grove
If you would like paid work in the film industry, this is the session for you. Elliot’s back and teaches how to prepare yourself for work as a writer, producer, director, technician, editor or art director.
-Showreels and CVs explained
-Choosing your field
-Marketing and promoting yourself
-Negotiating pay and what you can expect to earn
5 – 7 Online Networking drinks
Grab a cocktail and settle down in your living room for online networking drinks.
[This event has become very popular – bring lots of business cards and find a collaborator]
But don’t just take our word for it…
"I came to your Saturday film course last year and left hugely inspired. I made one film that day and wanted to make more. I also wanted to propose to my girlfriend and because you’d shown me what was possible on lo-to-no budget I decided to do it through the medium of film. I shot a retelling of the way we met (Though with the genders reversed and set in Brixton and not St Petersburg), called Jung Love, using actors that Natasha didn’t know and then screened it at the Ritzy in Brixton, telling her that it was part of a short film festival. This is what happened: 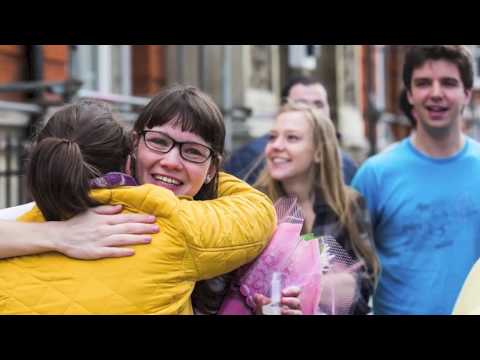 Anyway, I just wanted to thank you for the course, which far, far exceeded my expectations and for inspiring me to pursue my ambition to make a film (The first of many!)" - Ed Greig
"Enjoyed all of it, but found the director’s segment particularly enlightening." - BJ Holmes
"The directing section at Saturday film school by Simon Hunter was excellent – insightful, funny and definitely left me wanting more." - Wilson KM
"I found the Saturday film school course very useful in what I learned. It taught me things which I haven’t been able to learn from books, or at university. It was great to hear from the professionals themselves and be able glimpse into the insights of what really makes a great director, producer, scriptwriter, etc. It was also a very inspiring course! It reminded me of why I chose to go into film in the first place." - D. Kadra
"I thought the execution of all lectures were fantastic and the lectures themselves were informative, engaging and most of all fun. Even as a taster session, you are made to feel like part of the Raindance family and I fully intend to accept the invite. Overall I thought it was great and I have recommended to a few friends already." - Jamie Roberts
"This gave me goose-bumps all over. Twice! A brilliant example of low-to-no budget film-making as taught at Raindance . I did their Saturday Film School course yesterday and, as usual, it was fantastic. Elliot Grove was inspirational and encouraging and Simon Hunter ( a brilliant director and author of ‘Secrets of Screen Acting’) entertained and inspired us by sharing and demonstrating many tricks and ‘cheats’ of his trade.
Now it’s time to make a movie or two!" - Star Kennedy
About Simon `Hunter
Simon Hunter has directed over fifty tv commercials and three feature films. His directing debut was the horror movie LIGHTHOUSE in the year 2000 and he went on to direct the visual effects-laden sci-fi movie THE MUTANT CHRONICLES in 2008. Simon’s first feature, Lighthouse, was released theatrically in 2002. Simon subsequently became a much sort after commercials director before returning to features with Edward R Pressman’s Mutant Chronicles in the Summer of 2006. Simon flew to Qatar in 2014 to direct 20 episodes of a Scifi adventure series set in the desert. The filming takes place in Qatar, Jordan and India. In 2017 Simon directed his passion project, EDIE which tells the tale of an older lady who climbs a mountain in Scotland at the age of eighty-three. The film has had an enthusiastic and successful theatrical release in the UK and has sold to multiple territories. Simon lives in the German capital, Berlin. Since 1999 he has regularly lectured for RAINDANCE and other organisations.
Read Breaking in as a Film Director by Simon
About Elliot Grove
Few people know more filmmakers and screenwriters in Europe than Raindance founder Elliot Grove . He’s presided over the launch of some of Britain’s most interesting filmmakers. Edgar Wright was his first intern, Guy Ritchie and Matthew Vaughn met at a Raindance course in the mid 1990’s, David Yates (Harry Potter) Christopher Nolan and Gareth Edwards (Monsters, Star Wars) all launched their careers following film training courses at Raindance. Ken Loach and Mike Leigh are patrons.
Elliot founded Raindance Film Festival in 1993, the British Independent Film Awards in 1998. He has produced over 700 short films, and 6 feature films. He’s written eight scripts, one of which is currently in pre-production. His first feature film, TABLE 5 was shot on 35mm and completed for a total of £278.38. He teaches writers and producers in the UK, Europe, Japan and America. He has written three books which have become industry standards: RAINDANCE WRITERS’ LAB: WRITE & SELL THE HOT SCREENPLAY (Focal Press 2008), RAINDANCE PRODUCER’S LAB: LO-TO-NO BUDGET FILMMAKING (Focal Press 2004) and 130 PROJECTS TO GET YOU INTO FILMMAKING (Barrons 2009). His first novel THE BANDIT QUEEN is scheduled for publication next year. Open University awarded Elliot an Honourary Doctorate for services to film education in 2009.
Elliot’s Saturday Film School is the most popular film class in Europe, taken by over 17,000 learners since it was launched in March 2011.
His 2014 feature, Deadly Virtues directed by Ate de Jong (Drop Dead Fred) has been released in 8 territories and reached number 12 in the UK.

Raindance Film Festival
Follow Contact
About The Host: Check us out at Raindance.org Founded in 1992, Raindance is the UK's largest independent film festival and also founded the British Independent Film Awards in 1998, and Raindance.tv in 2007.
Website Link: http://www.raindance.org
Nearby Hotels Raindance Film School
Report a problem ?