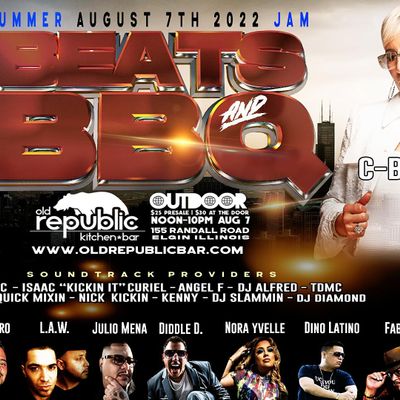 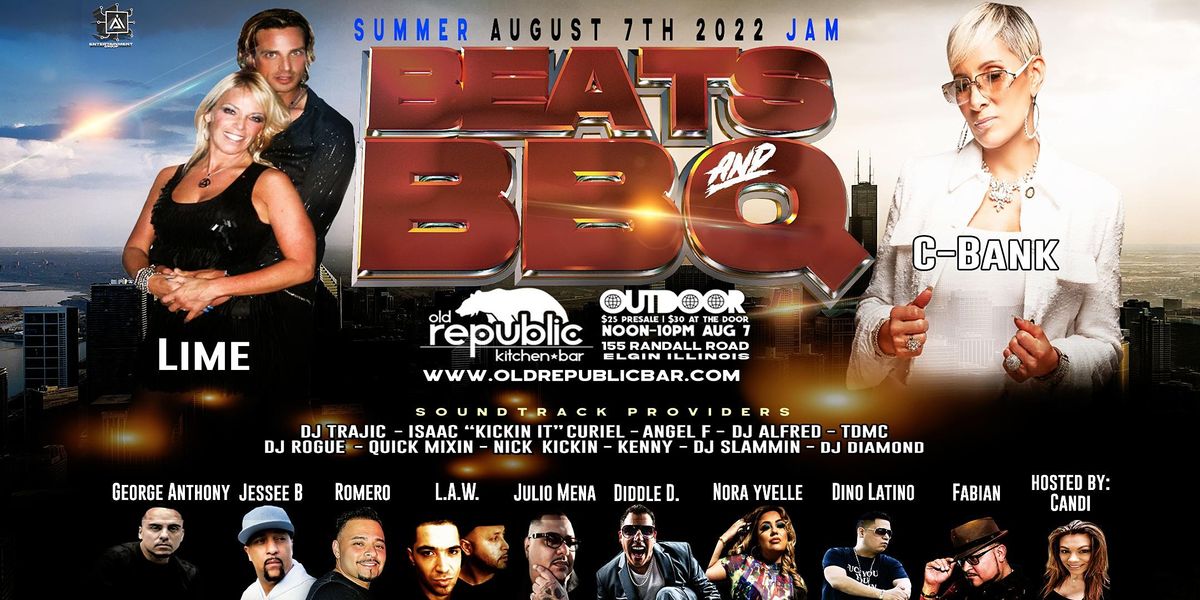 OLD REPUBLIC proudly presents BEATS and BBQ '22 on the HOTTEST Outdoor Stage for this ALL DAY Event!

**Only 100 Presale All Day Passes Available**

Listening and singing Freestyle since the late 80’s, Fabian released his first single under Artistik Records in 1996 with the 2 male/2 female group Xnerio entitled,  I’ll be your Lover.   Performing on the music scene since then, Fabian is the epitome of a performer.  Pulling double duty as a performer and concert host across the country.  If you’re looking to set a stage on fire, Fabian brings the heat!  Hearts on Fire is Fabian’s most recent release and it blazed the charts making his mark on the freestyle scene a big one!

Former member of the 90’s latin sensation boy group “Legacy”! With 2 number one hits under his belt, this soloist makes his come back to the Old Republic stage to perform his hit single “Love me 2Day” and much much more! You wont want to miss this performance.

Has an unquestionable passion for all music which flows  through all his tracks making his sound a distinct yet satisfying blend of pop and dance. His diverse vocal style reflects influences that truly define him as an artist along with his captivating stage presence that will keep you wanting more. Diddle D is the total package!

One of the most talented freestyle artists of today, GA was born in NYC has worked with some of the biggest names in the genera. Willie Valentin on “I LOVE YOU”, "Take Me Away" w/Nyasia, "NOW THAT IT'S OVER” w/George LaMond. GA never disappoints and we have him LIVE!

Signed an artist and production digital distribution deal with the venerable dance label Cutting Records.  The debut single titled ‘Intoxicated‘  is his first of many under this agreement. The Freestyle song has already garnered rave reviews from the diehard fanbase and continues to gain great momentum with its current video.

C-Bank is without a doubt one of the original icons of Freestyle her career has been incredible. From he smash hit “I WON’T STOP LOVING YOU” to “PERFECT” to “HE’S MY BABY NOW” her hit just don’t stop! And she’s an amazing live performer!

ONE MORE CHANCE FOR LOVE

Lime is a Canadian disco band from Montreal, Quebec. That have timeless dance music anthems with “YOUR LOVE”, “UNEXPECTED LOVERS”, “BABE WERE GONNA LOVE TONIGHT” and “ANGEL EYES” to name a few. They are still at the top of their game!

He's considered a pioneer and legend of the 90's Hard House movement. His long list of records, remixes and international appearances credits him as one of the most popular and accomplished DJ/Producers of his time.

The originator of the Legends of Freestyle mix series, former Executive @ UC Music and International records. Isaac Curiel has opened up for Artists such as Mana, Bad Boy Bill, and was the official Dj to Coca-Cola in the early 2000’s where he opened up for the Mexican national soccer team VS. USA in the gold cup finals.

Is a House and Freestyle music producer and dj that has made some of the best selling hot mixes in all of Chicagoland. Angel F is currently featured on La Mega 95.9 FM Chicagoland, Jamz 99.3 FM Kansas City, and Rhythm 105.9 FM Sacramento. In addition to numerous FM Radio programs, Angel F has a very successful social media show that is the gold metal standard in high quality music programming on social platforms. FB @DjAngelF

One of the hottest up and coming house music djs representing Aurora and Chicago. His style is both infectious and unforgettable. He is a must see!

The Def Men Crew (The Djs You Hate to Love) a dj and graffiti crew based out of Chicago since 1985. Dj Crazy and Dj Louie Diaz have been in the game for a long time working with artist like TKA, Cynthia, Joel & Esco, D’Zyre, Julio Mena, George Anthony, George Lamond, Shy, Rudy Fausto, Nyasia, Luis Guevarez, Safire, Twista, Ying Yang Twins, Yung Buck, New Kids on the Block, Bad Boy Bill and the list goes on. As Julio Mena official Djs and remixers, you can find TDMC rocking out Friday and Saturdays in venues across the Midwest area as well as on La Mega 95.9fm and 1330am. Check us out www.tdmcdjs.com.

Born and raised in the NW suburbs of Chicago, Slammin has rocked all type of events. Catch him spinnin your favorite tunes at your next event!

Is one of the premier lady djs in all of Chicagoland. Her style is both energetic and exciting.

We In The Basement, is one of Elgins premier Entertainment groups. Best known for their annual House Music Festival and most recently their Juneteenth celebration at festival park they have paved the way in using music to bring unity to the community.

Tickets for BEATS and BBQ '22 at OLD REPUBLIC can be booked here.