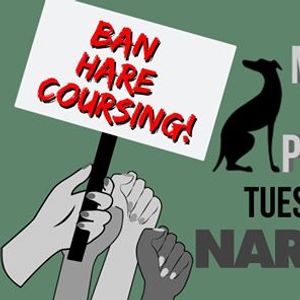 Please join us on Tues. 21st of January 2020, meeting at 12noon outside Stephen's Green Shopping Centre, and marching to the Department of Agriculture on Kildare Street, to demand a ban on hare coursing in Ireland!

There are currently 78 registered coursing clubs in the Republic of Ireland, and from September to February every year, they capture, terrorise and K*ll thousands of wild hares - just because they find it fun to do so. They also breed, exploit and K*ll the greyhounds they use for coursing too. No animal is left unharmed by this cruel "sport".

Under the 'Animal Health & Welfare Bill 2013', anyone involved in killing an animal during the course of hunting is exempt from being prosecuted - meaning that these sick individuals never have to answer to anyone for what they do.

Hare coursing has no place in the world in 2020, please join us on 21st January and let the Irish government know that they can't defend this industry any longer. The time for a ban is now!