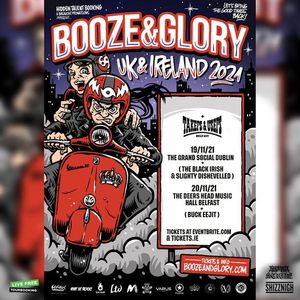 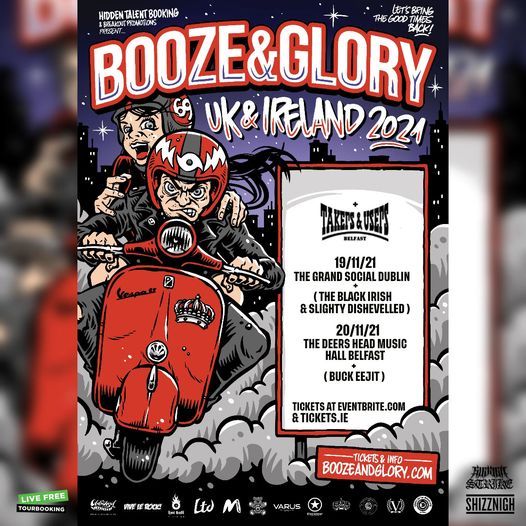 Original March tickets valid for this new show*
---------------------------------------------------------------
Booze & Glory:
Punk rock never died. It just has the occasional nap. Fortunately, however, Booze & Glory have been keeping everyone wide awake for the last decade, flying the flag for authentic working class rock’n’roll and the power of a rabble-rousing tune.
Formed in London in 2009, Booze & Glory started life as a straight-ahead salute to the rowdy street punk and Oi! bands of the late ‘70s and ‘80s UK scene. Thanks to some of the most infectious songwriting to emerge from the capital’s mean streets for a long time, and with a heroic and ruthless dedication to playing live, the band were steadily embraced by a colossal international fan base, with debut video notching up in excess of 15 mln views on YouTube along the way. Triumphant trips to Asia, South America, the US and pretty much anywhere that would have them ensured that Booze & Glory’s first three albums – Always On The Wrong Side (2010), Trouble Free (2011) and As Bold As Brass (2014) – became essential listening for fans of balls-out and snotty rock’n’roll.
March 2017 the four-piece came age on album number four, the appropriately-titled Chapter IV released on the resurrected Burning Heart Records. Chapter IV were an exhilarating exercise in positive thinking, the power of the people and the importance of seizing the day and living life like there’s no tomorrow. Always an international band, with past and present members hailing from Poland, Italy, Spain, France, England, Ireland, Sweden and Greece and the current line-up all possessing migrant blood.
In 2018 a lot has been going on in the B&G camp. The band have added innumerable new triumphs to their already impressive CV over the last two years, notching up 100 shows played around the world, including high profile appearances at legendary French festival HellFest and Punk Rock Bowling in Las Vegas. Along the way, Booze & Glory pulled off their first Japanese tour and a 10-date arena tour of Germany supporting Broilers, performing to 8,000 people every night. They also warmed the stage up for Judas Priest at Pol’And’Rock Festival in Poland, in front of a staggering 700,000 people. Not content with those great victories, Booze & Glory have also toured Australia for the first time and ticked off dates in Indonesia and Malaysia too. 2018 also saw the band walk off with the Vive Le Rock Award for Best New Band, as voted for by the fans!
More recently, Booze & Glory joined the mighty Persistence Tour in Europe then few months later these latter-day punk heroes have been noisily endorsed by Dropkick Murphys. The American folk-punk legends took Booze & Glory on the road for a five-week US tour early in 2019, introducing the band to their own vast fan base, with average 4,000 kids going berserk every night. Clearly the USA loves this music as much as everyone else!
The rest of 2019 will be a blur of activity for Booze & Glory. The band’s long-awaited fifth album "Hurricane" is due for release in October via the boys’ own Scarlet Teddy Records. Two exhilarating new anthems, the fiery Live It Up and the personal and poignant Too Soon, have already been released into the wild via YouTube. Recorded in Sweden at Soundlab Studios, the new album was produced by Millencolin guitarist Mathias Farm and promises to be the biggest, boldest and most explosive Booze & Glory album to date. With the introduction of piano and organ to the band’s trademark sound, the new songs amount to a wholesale upgrade for British punk rock, with a strong message of positivity and hope oozing from every boisterous, melody-drenched pore. Now featuring founder and singer/guitarist Mark alongside lead guitarist Kahan, bassist Chema, drummer Frank, Booze & Glory have never sounded more potent.
In these divisive times, instantly memorable songs about believing in yourself, finding common ground between people and standing up to racism, nationalism and hate could hardly be more timely or welcome. Finally, football fans will also be delighted to hear that there is a song about frontman Mark’s beloved West Ham United on “Hurricane”: both a ferocious comeback from the UK’s sprightliest punk warriors and one of the finest collections of street-level songwriting you will hear in this or any other year. Bring in the booze... glory awaits!

Tickets for Booze & Glory at The Grand Social 19/11/21 tickets on sale* can be booked here.