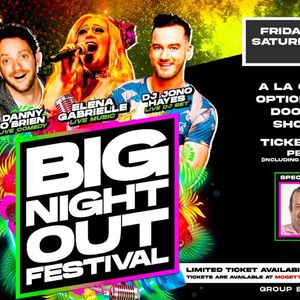 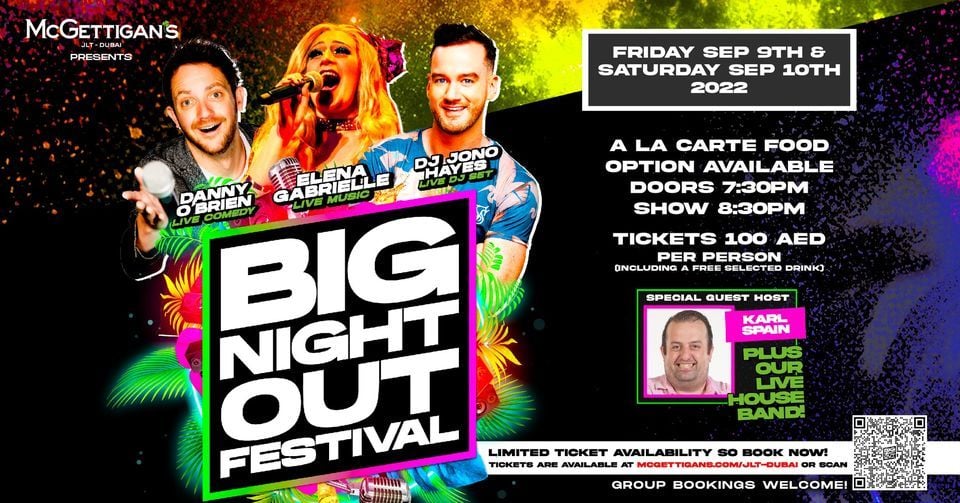 The Big Night Out Festival LIVE in McGettigans JLT!

Coming to McGettigans for two nights only - this mammoth full-stage show is packed with world-class live stand-ups, live music plus the biggest afterparty playing with a full set of pure bangers into the early hours from one of Dubai's best live DJs!

(Needless to say, there will be a few more surprises throughout the festivities too)

This is your ultimate one-stop shop for a huge night out with your friends or work colleagues so book your cat a babysitter and grab those tickets now as this will sell out fast.

The craic is most definitely back this September - only at McGettigans JLT!

We'll have amazing live music from 7:30 pm both nights from our incredible house band plus a 'Big Night Out" festival street-food-themed menu available before the show!

A bit more on our performers coming to Dubai:

Danny has been performing stand-up comedy for almost 15 years, headlining regularly at top comedy clubs and festivals to worldwide audiences. A regular on Irish TV and radio, his 'Lockdown Comedy Special' on Virgin Media Television was one of the most viewed comedy specials to date on Irish Television. His friendly, high energy and anecdotal style draws in an audience and brings on the huge laughs with ease! He has toured his solo shows all over Ireland, the UK, Europe, The US, Central America, Australia, Asia, and beyond and is one of the most in-demand international acts in the world.

In 2018 he opened for American comedian Bill Burr in front of over 9,000 people in Dublin.

We can’t wait to have him back on our stage for the ‘Big Night Out Festival'.

“He opened for me at the 3 Arena and he f*cking murdered it!” Bill Burr

‘Big Night Out Festival’ for her first-ever live performance in the UAE! With over 14 years of experience as a performer having toured to over 65 countries, there is no audience she is afraid of. Her intuitive storytelling style along with her witty, no-holds-barred approach to stand-up comedy has also seen her go viral with 30 million-plus views on YouTube to date. In 2015 Elena was a featured act at TEDx and in 2021 was the face of two global “Swatch” advertising campaigns.

Elena’s talents are greatly sought after across Europe, even opening for the US comedian and Netflix star Iliza Schlesinger.

Karl Spain has been a staple of Irish stand-up comedy for twenty years.

Karl has also performed stand-up on television all over the world – the U.S, the Middle East, Australia, and even as far away as England.

He regularly performs at festivals such as Kilkenny Cat Laughs, the Galway Comedy Festival, the Vodafone Comedy Festival, the Edinburgh Fringe Festival, and Montreal Just for Laughs. Karl has toured Australia as well as the United States and South Africa. In 2019 Karl toured internationally with Kevin Bridges and is now touring with him again this spring. He is without a doubt one of the best live performers and joke writers in the country, don't miss him live at McGettigans JLT this September!

“The future of Irish comedy is in safe hands” HOT PRESS

Best known as one of the voices on The Big Breakfast, Jono is also the DJ at McGettigans most weekends, as well as having played support for The Backstreet Boys, Mel C, Rag n Bone Man, Westlife, and even Boyzone! Never taking his music choices too seriously, staying out too late when he works at 6 AM with a penchant for requests in exchange for drinks are what he lists as his pros…Imagine what the cons list looks like!

You may also like the following events from McGettigan's:

Tickets for McGettigans Presents: The Big Night Out Festival LIVE can be booked here.