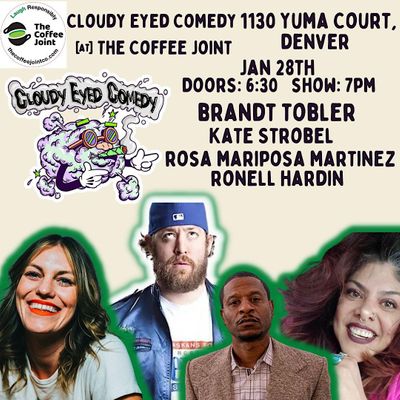 C﻿loudy Eyed Comedy at The Coffee Joint is Headlined by

Originally from Cheyenne Wyoming, Brandt Tobler is a stand up comedian, author, and actor. Currently living in Denver, Brandt has toured overseas performing for our troops, and has been featured on Comedy Central, Fox, and ESPN. He has recorded two CD’s “Token White Boy” and “Ramblin’ and Gamblin” and is currently the host of the award winning podcast “The 31". Brandt’s best selling memoir "Free Roll" was released in the summer of 2017.

Kate Strobel is a Denver-based comedian and writer whose energetic style livens every room with an earnest enthusiasm that’s infectious (in a non-diseasey way). Her unhinged act-outs, authentic storytelling, and endearing confessions charm audiences and make for unique, genre-bending standup performances.

R﻿osa is hilarious Comedian out of Colorad

R﻿onell is an and up comic out of Denver, and runs "The Laughter Loft" above The Sports Column

Tickets for Cloudy Eyed Comedy @ The Coffee Joint can be booked here.

Dylan Kantor
Local Denver Stand Up
Are you the host?
Nearby Hotels The Coffee Joint by Yuma Way, 1130 Yuma Court, Denver, United States
Event details from Eventbrite Report a problem ?