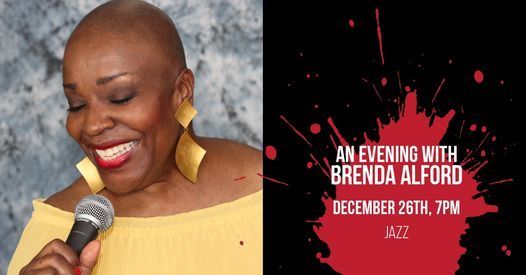 This 90-minute concert highlights some of the music from Brenda Alford’s latest Inspirational Jazz recording, “Messages… Songs for the Soul”, an outcome of the pandemic that she composed to heal and uplift the spirit. Ms. Alford also presents some of her favorite classics, tributes to her musical mentors, Horace Silver, Ella Fitzgerald, and Carmen McRae, the jazzy soul of Aretha Franklin and Phyllis Hyman, and even some bebop vocalese! With a quartet that consists of world class instrumental stars in their own right, the audience experiences instrumentals that capture the senses, ballads that envelope the heart, straight ahead swing that sizzles, and the fabulous funk of the soul side. In a rhythmically diverse Jazz journey from Africa, along Brenda Alford’s life pathway, right on up to New York City, the arrangements and songs in this concert are unique to Brenda’s virtuosity, and to top it off, there‘s a little holiday music!

Sang in concert at the Meyerhoff Symphony Hall (Baltimore, Md.)

Sang in concert at the Broward Center for the Performing Arts

Sang in University of Miami’s Festival

Co-produced and starred in the inaugural Continental Jazz Festival

Antulio is a highly acclaimed pianist, keyboardist, arranger, composer, musical director, and studio producer. A graduate of the Olivares Music Academy and the Lamas Conservatory in Venezuela, this titled Professor of Piano is a collaborator with Jazz Master Sammy Figueroa, Bobby Ramirez, violinist Federico Britos, and Cachao’s All-Star Orchestra. He is a member of the Latin Academy of Recording Arts and Sciences. He is the producer of Brenda Alford’s latest CD, “Messages…Songs for the Soul.” He is also the featured keyboardist and musical director for the concert video, “Messages…Songs for the Soul.”

Paul is an “in demand” upright and electric bassist in South Florida and around the world. He was born in Pennsylvania and grew up in Canada. He is a graduate of the University of Miami’s Frost School of Music (Summa Cum Laude, 1999). He has performed, toured, and recorded with a plethora of musical greats in a wide range of musical genres, and his talent for jazz improvisation and skills in musical collaboration are recognized worldwide. Paul has worked with Dr. Lonnie Smith, Arturo Sandoval, Randy Brecker, Larry Coryell, Marilyn Maye, Ira Sullivan, Wynton Marsalis, Paul Anka, Duffy Jackson, Freddy Cole, George Benson, and many more. He is the featured bassist on Brenda Alford Concert video, “Messages…Songs for the Soul.”

Jon is a highly skilled drummer who was born in Stuart, FL and graduated from Florida Atlantic University with a degree in Jazz Performance. His impeccable rhythmic capabilities are indicative of his well-rounded, yet focused, flexible musicianship. He is ranked among the great drummers of Jazz and R&B. He has worked with renown recording artists, John Legend, Kelly Rowland, and Tamia (protégé of Quincy Jones), just to name a few. He is the featured drummer of Brenda Alford’s concert video, “Messages…Songs for the Soul”

John is a Grammy-nominated musician who has recorded and toured with artists from almost every genre, including Julio Iglesias, KC and The Sunshine Band, Ricky Martin, Engelbert Humperdinck, Jon Secada, and Gloria Estefan. He has also performed, by invitation, with Hiram Bullock, Nat Adderley, Rosanna Vitro, and percussionist, Sammy Figueroa. He most recently toured with Gloria Estefan and Sammy Figueroa, perform throughout South Florida, and recorded in a number of studios for different projects. He is the featured saxophonist in Brenda Alford’s virtual Mother’s Day Concert video, “A Tribute to the Ladies.”

Tickets for An Evening with Brenda Alford can be booked here.