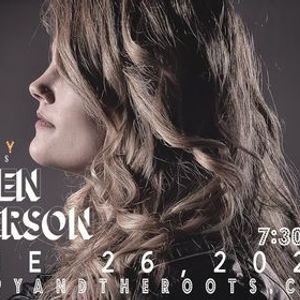 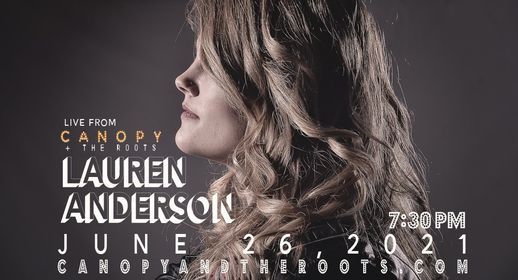 Listen on Spotify: https://open.spotify.com/artist/3AoeCSG1zkka1T0WO3dPUJ
LAUREN ANDERSON performed a livestream from Nashville for Canopy + the Roots during the shelter-in-place and joins us again for her third show and a new release, "Stand Still".
Compared with talents such as Janis Joplin and Joss Stone, Lauren is a soulful rocker who leaves you hanging on every note. Originally from Chicago, she has been regionally touring since 2014, has opened for artists such as Beth Hart, Samantha Fish and Walter Trout, and was named Female Vocalist of the Year in 2015 by the Midwest Music Awards. Now based in Nashville, TN, she recently represented the Nashville Blues & Roots Alliance in Memphis, TN in the Galaxie Showcase during the 2019 International Blues Challenge. She has also played at notable stages and events, such as Bonita Blues Festival, City Winery Nashville, Uptown Theater, Fitzgeralds Saloon, Knuckleheads Saloon & River Music Experience. She released her second EP titled, "The Game", in the spring of 2018, which was named top 50 blues/rock albums for five straight weeks! Now promoting her third EP, "Won't Stay Down", released in the summer of 2019, she's looking forward to soon getting back on the road, bringing her unique blend of rock music that will touch your soul.
Intimately connect to both artist and venue in our lush, speakeasy-style, 50 seat listening room. Hear the stories behind the all-original songs as the artist(s) share their inspiration and even their heartaches.
Doors open at 7:00pm; show starts at 7:30pm; balcony seating available for VIP add-on or members only. Locally-sourced craft beer and wine available for purchase.
Mask up to get down.

You may also like the following events from Canopy + the Roots:

Tickets for Lauren Anderson :: Rock n' Roll with a lotta soul LIVE in the Roots can be booked here.