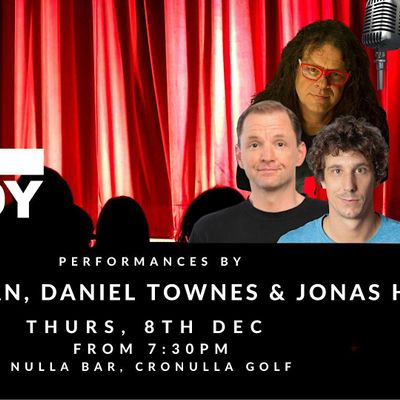 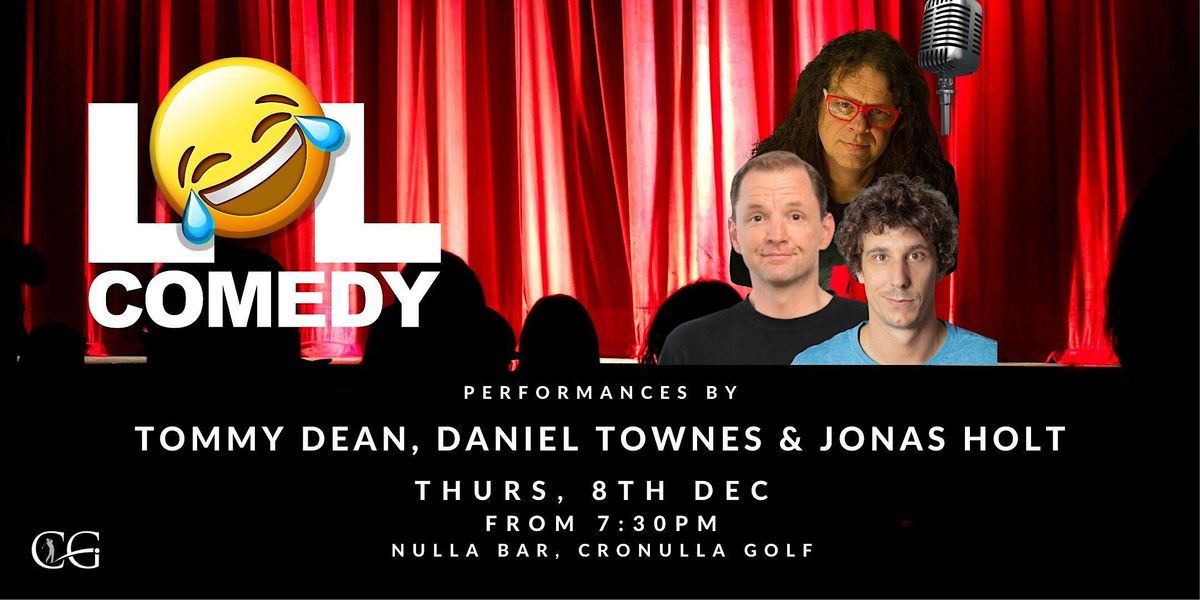 Cronulla Golf is the premiere golf club in the shire, now it becomes the home of comedy for the best professional comedian’s in Australia

With his astute observational style and pleasantly soothing drawl, Tommy is consistently making him a standout favourite with theatre audiences, corporate clients, festival producers, TV and radio shows alike. His pin-sharp banter, genial manner and vast stock of hilarious routines with broad appeal, Tommy never fails to connect with and impress any audience.

Tommy’s impressive media CV includes appearances on Spicks and Specks, Good News Week, Stand Up Australia, Rove Live and The Sideshow as well as multiple appearances on Just For Laughs Sydney’s Stand-up Series and Australia: Live – filmed for the Comedy Channel at the Sydney Opera House. He was booked to perform to an empty Sydney Opera House during Sydney’s first lockdown in a very special streamed event, Humour Us.

With a career that has him consistently booked as the go-to audience warm-up for cerebral comedy TV shows; including the very popular Q and A, Gruen Planet, Gruen Transfer and the Prime Minister’s Australian of the Year awards ceremony, Tommy has performed in the leading comedy clubs in the USA, New Zealand, Europe and South East Asia and is an in-demand headliner across the Australian live comedy circuit.

Tommy can be heard regularly on ABC 702 radio, where he is a frequent guest on Richard Glover’s Thank God It’s Friday drive show – and an unexpected temporary move back to the US in late 2019 saw Tommy sending in a weekly ‘Letter from America’ for the show, which has proven to be a huge hit with listeners who adore his knack for interweaving the foibles of his adopted Australia with the dark reality of his home country.

This affable, ageless American with the rock god long hair and booming deep drawl is loved by young and old – to watch him find the funny in the mundane along with the bizarre of our day-to-day existences is always an absolute joy.“Smarts, skill and wit” – The Age

Since emerging on the scene almost a decade ago as one of Australia’s hottest comedy prospects, Daniel Townes has rapidly made his name as one of the country’s best live comedians.

With his laid-back style of stand-up, Townes has won over audiences worldwide, having performed in Singapore, Germany, Spain, Ireland, South Africa, Canada, Holland, and all over the UK. In Australia, he’s worked everywhere from Mildura to Broken Hill and Griffith to Wodonga.

“It takes real talent to summarize all our shortcomings as a society and still entertain an audience. Luckily, Daniel Townes is a very talented comedian.” – The Music 2015

Jonas Holt began his stand up comedy career in 1995 in Perth, Western Australia. After winning an impersonation contest 13 times, and other comedy competitions, he moved to Sydney where he began acting courses and singing lessons.

He started hosting kids’ parties and was the toast of backyards in suburbs everywhere.

By 1998, Jonas was supporting some of Australia’s best comedians regularly all over Sydney. Then in ’99, he brought guitar parodies to the stage adding another level of comedic energy.

Now Jonas has performed all over Australia, appeared on TV and radio, run stand up comedy clubs, produced funny bumper stickers, and in 2016 stunned the judges of Australia’s Got Talent as a Tony Abbott Impersonator.

You may also like the following events from Cronulla Golf:

Tickets for LOL Comedy @ Cronulla Golf can be booked here.