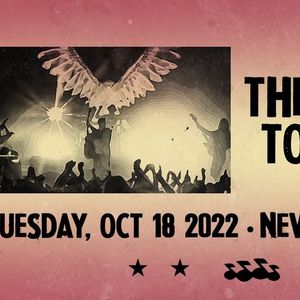 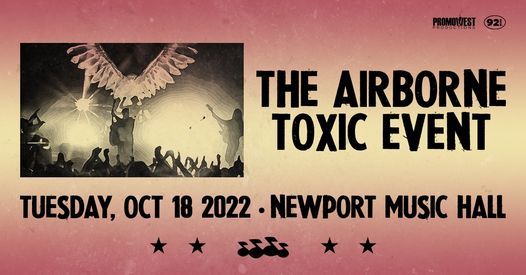 All PromoWest and AEG staff will be required to wear masks and we *strongly encourage* fans to wear a mask while in attendance as well.

From the band: We can officially announce the rescheduled dates for our Hollywood Park Tour. We will be performing at all the same venues and cities. Your current tickets will be honored for it's rescheduled date. Unfortunately, Boise, Crystal Bay and Albany are cancelled.

For the next 30 days (December 9, 2020 - January 9, 2021) you can refund your tickets at its original point of purchase. If you pre-ordered your tickets though the band's web-store and would like a refund, email YWlyYm9ybmVtZXJjaCB8IGdtYWlsICEgY29t] with your order number. Refunds can take up to 3 business days to post into your account.

Due to the recent large gatherings mandate by the state of Ohio, The Airborne Toxic Event show at Newport Music Hall on October 25, 2020 and postponed until Sunday May 2, 2021 has been rescheduled again for October 17th, 2021. There is nothing you need to do as your tickets will be valid for this new date.


The Airborne Toxic Event has announced today’s premiere of “Come On Out,” the first single from their eagerly awaited new album, HOLLYWOOD PARK. The track is available now at all DSPs and streaming services. Uniquely, HOLLYWOOD PARK arrives alongside a new literary work of the same name by Mikel Jollett, to be published by Celadon Books, a division of MacMillan, on May 5. Hollywood Park: A Memoir sees Jollett chronicling his extraordinary personal journey, from his early childhood in one of the most infamous cults of the 1970s, through a childhood of poverty and emotional abuse, before finding his voice as an artist among the confusion of an adult life spent nursing the wounds of childhood, and the redemption which came from looking inward and an acceptance of self and the fierce love of family. Pre-order Hollywood Park: A Memoir HERE.

“I mostly grew up in the wreckage of the cult where I was born, since we left when I was so young. It came to me like a puzzle I had to put together, almost like separate realities with different rules. So I wrote the songs on the record (and the book) from that perspective: that of a child trying to piece together the reality of the changing world around him; because that’s how I experienced it: like a mystery I couldn’t quite fathom that I had to piece together over a lifetime,” says Airborne Toxic Event founder and front-man Mikel Jollett.

Hollywood Park: A Memoir has already been hailed as a milestone work, with Newsweek declaring it one of “40 Must-Read Fiction and Nonfiction Books to Savor This Spring,” writing, “(Mikel) Jollett was raised from childhood in a cult, brought up under the leaders of Synanon. With stunning clarity, he tells of his mother’s escape and the subsequent trials his family endured.” “A shocking but contemplative memoir about the aftermath of an unhealthy upbringing,” declared Publishers Weekly in a starred-review. “Jollett also talks about turning pain into music, getting help for abandonment issues, and finding love and starting a family.” O The Oprah Magazine named Hollywood Park among “The 30 Most Anticipated Books of 2020 (So Far),” writing, “The front-man of rock band Airborne Toxic Event chronicles, in gorgeous and exacting lyricism, his harrowing coming-of-age within (and eventual escape from) the Church of Synanon, a violent religious cult.” ABC’s Good Morning America included Hollywood Park: A Memoir in its own “20 Books We’re Excited For In 2020,” writing, “What comes through the pages is a story of fierce love and family loyalty. This moving and profound memoir is for anyone who loves a good redemption story.”

The Airborne Toxic Event will celebrate HOLLYWOOD PARK with a truly epic live schedule, including a new series of US headline dates, beginning October 9 at Los Angeles, CA’s Greek Theatre and then travelling through the month with highlights including a much anticipated visit to New York City’s historic Beacon Theatre (October 22). In the meantime, the already announced first leg of the tour gets underway May 27 at The Van Buren in Phoenix, AZ and continues into the summer, culminating with a once-in-a-lifetime performance backed by the San Francisco Symphony, set for August 1 at San Francisco, CA’s Louise M. Davies Symphony Hall.

In addition, The Airborne Toxic Event will herald the arrival of HOLLYWOOD PARK with a pair of four-night-stands at Los Angeles, CA’s El Rey Theatre (March 31, April 1, 2, 4) and New York City’s Bowery Ballroom (April 7-10), with all eight shows sold out within 30 seconds of ticket release. As if all that weren’t enough, the band will make a top-billed festival appearance at Cleveland, OH’s Wonderstruck on Sunday, June 7. For updates and more, please visit www.theairbornetoxicevent.com/shows.

Produced and mixed by the band’s longtime collaborator, multiple GRAMMY® Award-nominee Mark Needham (The Killers, Fleetwood Mac), HOLLYWOOD PARK serves as both companion volume and musical soundtrack to Jollett’s remarkable memoir, adding vivid sonic color to his wrenching and ultimately life-affirming personal chronicle. Indeed, both the album and book were fueled in large part by the untimely death of Jollett’s father. Devastated to his very core, he withdrew from both the world and his work for nearly a year before ultimately finding the strength to begin anew.

Jollett will be traveling on a wide-ranging book tour slated to visit independent bookstores through mid-May, beginning Friday, May 1 at Los Angeles, CA’s First Congregational Church of Los Angeles and then making stops across the country including a special publication day event at New York’s world famous The Strand on Tuesday, May 5. For all ticket links and up-to-date information, please see https://theairbornetoxicevent.com.

The Airborne Toxic Event first emerged in 2006, centered around the powerful songcraft of Mikel Jollett, already an acclaimed freelance journalist, editor, and writer whose work had appeared in such prestigious publications as McSweeney’s, the Los Angeles Times, and FILTER, among many others. The band’s self-titled debut album followed two years later, highlighted of course by the breakthrough hit single, “Sometime Around Midnight,” an RIAA gold-certified, top 5 smash on Billboard’s “Alternative Songs” chart, later ranked at #1 on iTunes’ “Best of 2008: Alternative” tally.

The Airborne Toxic Event spent much of its time on the road in the years that followed, including sold out world headline tours, countless international festival sets spanning Coachella and Lollapalooza to Japan’s Fuji Rock and the UK’s Reading/Leeds, and more. Known for their epic sonic energy and potent showmanship, the band have performed with a number of American symphony orchestras – including the Louisville Orchestra and the Colorado Symphony Orchestra – in addition to collaborations with the Los Angeles-based Calder Quartet, the Lalo Guerrero School of Music Choir, and Los Angeles’ Belmont High School Marching Band, among others.

HOLLYWOOD PARK marks The Airborne Toxic Event’s first new album since 2015’s DOPE MACHINES and its limited edition companion volume, SONGS OF GOD AND WHISKEY, both followed in 2016 by the standalone single, “America.” DOPE MACHINES in particular was greeted by a rush of critical acclaim, with the Los Angeles Times raving, “the record marks a profound sonic turnaround for the band; instead of the yearning post-punk and folk flourishes of prior releases, they’ve picked up a minimal, purposefully synthetic sound, drawn from frontman Mikel Jollett’s new investment in production techniques.” “Never before have The Airborne Toxic Event sounded as freewheeling and creatively uninhibited as they do on DOPE MACHINES,” declared Atwood Magazine. “Dark electronic indie rock is applied in both minimalistic and anthemic settings to create a panoply of new sounds with catchy hooks... It reads like a book from start to finish, featuring hooks, engaging passages and a few surprise twists and turns.” DOPE MACHINES is “moody and dead serious, layered with deep cushions of synthesizers and airy echoed backing vocals,” wrote the Los Angeles Review of Books. “(Jollett’s songs are) vividly mindful of the high stakes for men and women whose primary experience of the world is that they are solitary beings surrounded by an ‘endless expanse of space,’ and who believe the only way to cross that expanse is to give oneself up to love.”

Tickets for The Airborne Toxic Event - Presented by CD92.9 - Rescheduled can be booked here.