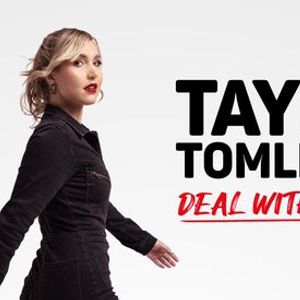 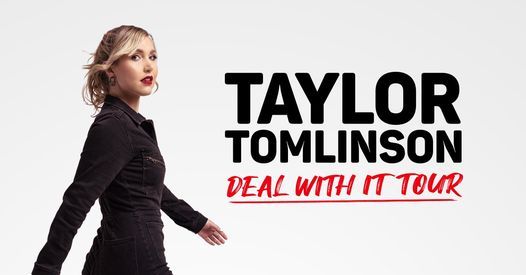 Taylor Tomlinson’s perspective possesses a degree of wisdom that’s typically earned with age. Named to Forbes’ 2021 class of 30 Under 30, fans got a healthy dose of that wisdom when her first-ever, hour-long special, “Quarter-Life Crisis,” debuted on Netflix last March just as the world entered into a once-in-a-century pandemic. The special went on to earn unanimous critical praise with the Washington Post calling her “your favorite quarantine-watch” and Newsweek opining she is “undeniably hilarious” and “wise beyond her years.”

Taylor’s Netflix special was the culmination of years of writing and performing, and it showed. The set was a masterful display of deft timing, crowd connection, physicality, and smarts. The material changed over the months that passed from pitch to performance, reflecting shifts in Taylor’s own life. “A lot happened over the summer of 2019,” Taylor says. “I ended up breaking off my engagement. It was a lot of growth in a very short period of time. It changed the hour a lot from what I had submitted back in February––and I think made it better.” For filming the special, Taylor chose the Aladdin in Portland, Oregon.

“I found out I got the special and enjoyed it for about 20 minutes, then I got really stressed and was pretty laser focused,” Taylor says, laughing a little. “You think you’ll take a break after you film it, but then you realize, ‘Oh shoot. I need a whole new hour of material––I can’t take a break!”

The special went on to be named “Best of 2020” by New York Times, Decider, Paste and more. And Vulture’s “comedian you should and will know” is just getting started! She has already developed a whole new hour of material and can’t wait to get back on the road later this year when safe to do so and share her observations and self-discovery from quarantine with the world.

You may also like the following events from CBUSArts:

Tickets for Taylor Tomlinson: Deal With It Tour can be booked here.

CBUSArts
Follow Contact
About The Host: CBUSArts is a regional ticketing system servicing central Ohio and is the official ticketing site for multiple venues, including the Ohio Theatre, Palace Theatre, Southern Theatre, Lincoln Theatre, and the McCoy Center for the Arts.
Website Link: https://www.cbusarts.com/
Are you the host?
Nearby Hotels Palace Theatre, Columbus, OH 43215, Columbus, United States
Report a problem ?