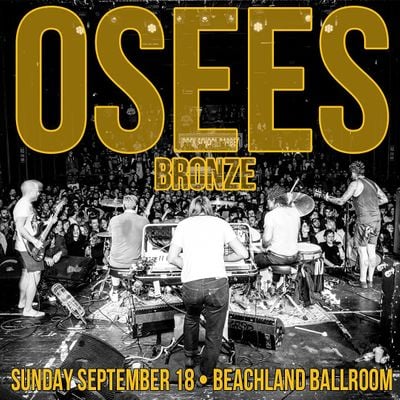 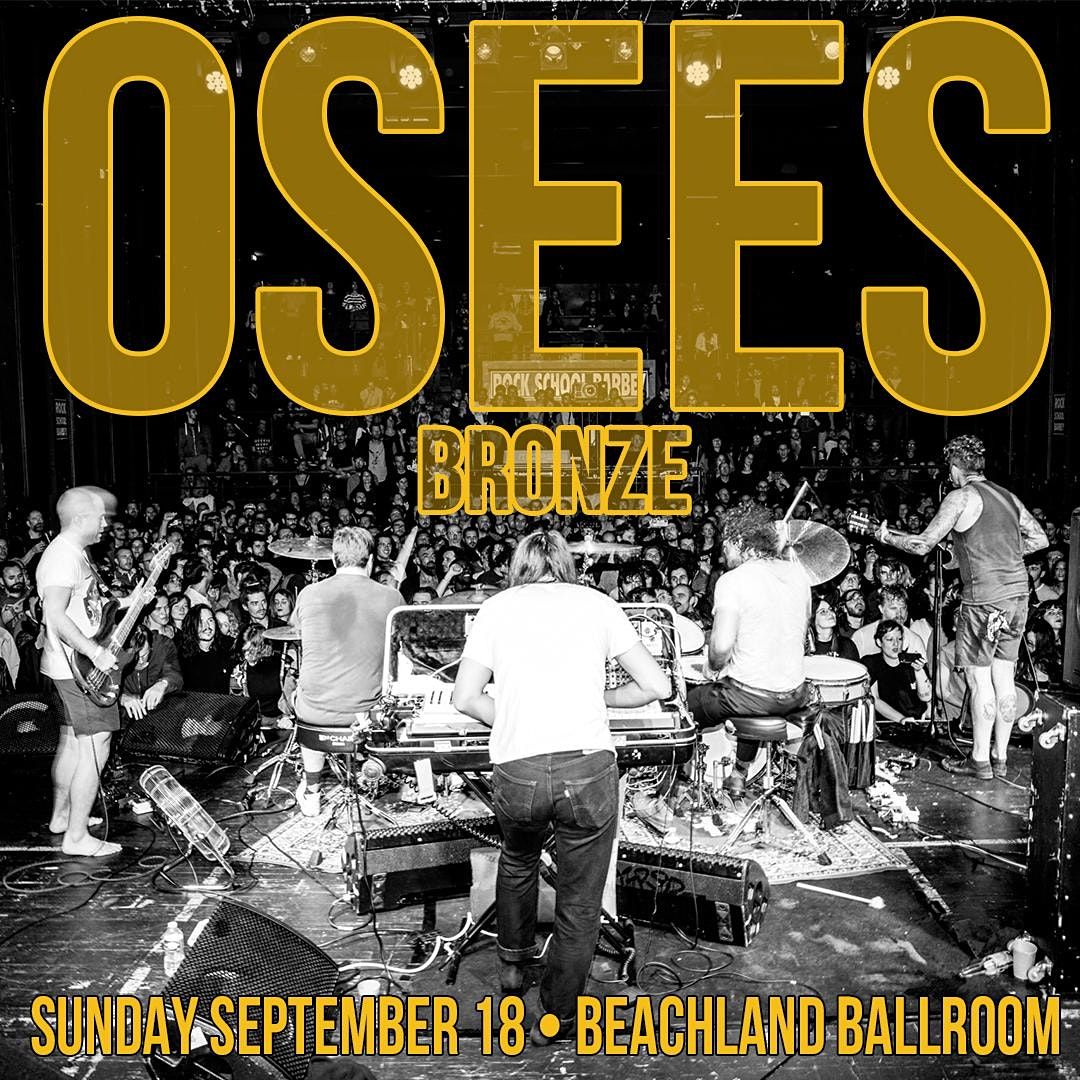 OSEES and Bronze perform at the Beachland Ballroom on Sunday, September 18 @ 8:30pm.

This Way Out, our vintage and record store, will be open during the show. You do not need a show ticket to shop at This Way Out.

Crack the coffers, Osees have spawned another frothy LP of head-destroying psych epics to grok and rock out to. You’ll notice the fresh dollop of organ and keyboard prowess courtesy of “Memory of a Cut Off Head” alum and noted key-stabber Tom Dolas…the Quattrone/Rincon drum-corps polyrhythmic pulse continues to astound and pound in equal measure, buttressed by the nimble fingered bottom end of Sir Tim Hellman the Brave and the shred-heaven fret frying of John Dwyer, whilst Lady Brigid Dawson again graces the wax with her harmonic gifts. Aside from the familiar psych-scorch familiar to soggy pit denizens the world over, there’s a fresh heavy-prog vibe that fits like a worn-in jean jacket comfortably among hairpin metal turns and the familiar but no less horns-worthy guitar fireworks Dwyer’s made his calling card. Perhaps the most notable thing about Smote Reverser is the artistic restlessness underpinning its flights of fancy. Dwyer refuses to repeat himself and for someone with such a hectic release schedule, that stretching of aesthetic borders and omnivorous appetite seems all the more superhuman.

BRONZE is an exercise in impulse. BRONZE is also the San Francisco based trio of Brian Hock, Rob Spector, and Miles Friction the latest addition to the RVNG Intl. family with their debut album, Copper.

In early 2006, Hock moved back to his native San Francisco from Berlin and took up residence with Spector in the warehouse / show space known as The Cave. The two conspired to start a new live project and enlisted the help of Friction to form BRONZE. After preliminary attempts to find the right environment to house the Copper Club, the Secret Society of the Bronze Age, Miles founded the Trojan Cavern in San Fran's Dogpatch neighborhood. From this outpost, BRONZE undergo disciplined training exercises in various weaponry, sonic hypnosis, horticulture and all-important copper talk. It's also from the Trojan Compound that Copper was created.

Stream-of-consciousness lyrical cooing and restrained analog trickery rest atop constant cog rotation grooves on Copper. These elements yield a truly conductive album, abundant in compositions that beg for a listener's oxidizing ear. Commencing with"A Showdown Of Sorts", the record assumes a vague narrative aided by the allure of Tuxedomoon / Ralph Records-y exoticism, albeit less claustrophobic. "Showing Them" staggers into even Wierd-er territory, with eye flashes and spots of Legendary Pink Dots. "So Slow" and "The Rouge Became" are sister tracks fallen not far from the same Silver Apple(s) tree. "Wits" and "Fumes In Suits" counter clockwork like a high-pressure Units track and place Copper in the lexicon of San Fran synthesized and syncopated anti-stardom.

You may also like the following events from The Beachland Ballroom and Tavern:

Tickets for OSEES • Bronze can be booked here.

The Beachland Ballroom and Tavern
Follow Contact
About The Host: Cleveland's most eclectic music venue... Rockin the CLE since 2000!
Website Link: https://www.beachlandballroom.com
Are you the host?
Nearby Hotels Beachland Ballroom, 15711 Waterloo Rd, Cleveland, United States
Event details from Eventbrite Report a problem ?