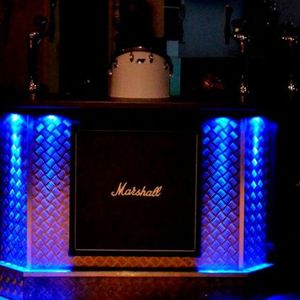 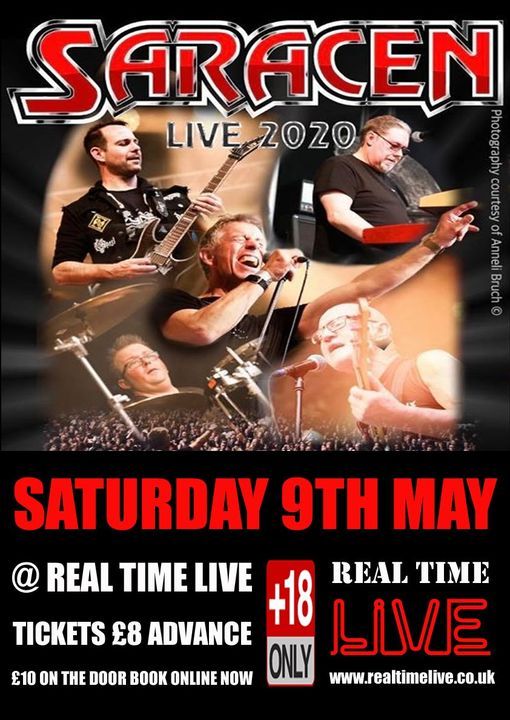 Saracen invite you to Real Time Live for the ONLY local gig for 2020 !!!!! Support from Traitors Gate

Life-long pals Richard Lowe and Rob Bendelow formed their first band - 'Lammergier' - during the mid 70's, together with folk-guitarist-turned-rock-bassist Barry Yates...
Following their first live performance in 1977, the band gigged extensively across the English 'Midlands' during the ensuing years. The standard of those 'live' performances, combined with their unique brand of symphonic rock, saw Lammergier amass a large and loyal following of fans. Then a new decade arrived, and with it some major developments for the Matlock-based rockers...
Having played with a variety of drummers and vocalists, the ideal line-up finally crystallised:
And their named changed from Lammergier to SARACEN. But the music remained the same; an ever-growing repertoire of powerful, guitar-oriented rock, amply laced with lush keyboards and evocative vocals. After several months 'off the road', with time spent putting the finishing touches to their new 'live' show, the Lads re-emerged as 'Saracen' in January of 1981. And this time with plans for a debut album!
During the summer of that year the now famous 'Heroes, Saints & Fools' album was recorded, at Fairview Studios in Beverley, England. Released in October '81, it was received with critical acclaim, and is still regarded as a 'classic' of it's genre even today, thirty years on!
Just seven tracks attempted to capture the spirit and breadth of Saracen's music:
Crusader
Rock Of Ages
No More Lonely Nights
Horsemen Of The Apocalypse
Heroes, Saints & Fools
Dolphin Ride
Ready To Fly
Initially released on an independent label - 'Nucleus' - it wasn't long before a deal was struck with major players 'Polygram'. A nationwide tour followed, as the album entered the 'Top 50'.
Saracen tracks received regular airplay on Tommy Vance's 'Friday Night Rock Show', culminating in a 'live' session being broadcast in January 1982. Yet, inexplicably and to many people's surprise, this proved to be the pinnacle of Saracen's reign.
Saracen recorded their second single - 'We Have Arrived' - then following the departure of Thorne and Bendelow during the winter of 1983, the band signed with Neat Records, to record and release their follow-up platter 'Change Of Heart'.
The album signalled a change of direction too, and the new-look Saracen continued to gig extensively, until finally 'closing the book' in mid-1985.
That appeared to be the end of the Saracen saga, until Rob Bendelow released his solo 'Templar' album - 'Come to the Light' - in January 2000.
Following great reviews in the rock media, Now And Then Records were able, at long last, to track down no less than three of Saracen's founder members, and resurrect their musical dynasty with a 3-album record deal.
'Red Sky' was the first of these - released in March 2003.
Musically, it features re-works of several old Saracen classics, as well as new tracks written during the last 2/3 years. As one website put it on hearing the news, "the Lords of Epic Rock are back"!
That same year became Saracen’s first appearance in over 20 years at the 2003 Bloodstock festival.

2005 arrived and Saracen started work in the studio on "Vox" next Saracen release, released in 2006, Vox In Excelso is a concept album, based on the mysterious and controversial history of the Knights Templar – a medieval body of warrior monks, who grew to become one of the most powerful military & financial organisation in Europe. But their story goes far beyond battlefield exploits – the Knights Templar were guardians of an Ancient Knowledge; secrets that had major implications for the nations and religions of the western world... that are still cherished and protected even to this day...
Also the double CD re-issue of Red Sky/Heroes Saints & Fools was released in 2006, following which the band takes a sabbatical to work on separate projects.
In 2008, the guys met up to discuss the future of Saracen. All believed that due to the interest and kindness shown by the fans over the years Saracen should be out on the road.
2009 saw Saracen return to full strength with some local shows as warm up to playing at Hard Rock Hell III, being asked to return to play again in 2010 at Hard Rock Hell IV.
2011 has been a busy year for Saracen with further shows at British Steel festival in Camden and Keep it True Festival in Germany.
The latest release from Saracen, for 2011 is a concept album, carefully crafted around the life and times of that ultimate Hollywood icon – Marilyn Monroe. This opus charts her roller-coaster life, from young orphan to worldwide superstar...and beyond. And as with Saracen’s previous album (‘Vox In Excelso’) the storyline does not shy away from the darker recesses of history; in this case Marilyn’s problematic life...and untimely death.
.

You may also like the following events from Real Time Live:

Tickets for Saracen + Friends A Night Of Nwobhm can be booked here. 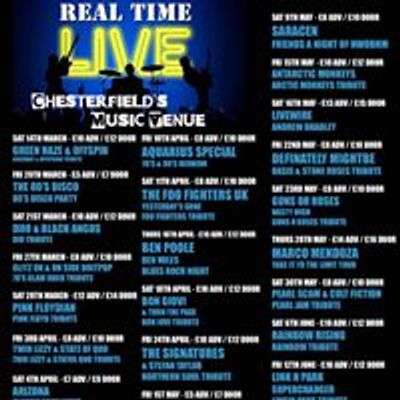 Real Time Live
Follow Contact
About The Host: Chesterfield's only dedicated live music venue - created by musicians for musicians and music lovers This is an 18+ venue
Website Link: http://www.realtimelive.co.uk
Are you the host?
Nearby Hotels Real Time Live, 13 Marsden Street, Chesterfield, United Kingdom
Report a problem ?