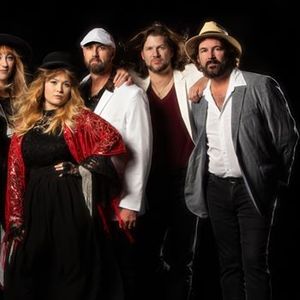 Rumours: A Tribute to Fleetwood Mac w/ Runnin Down a Dream

Rumours: A Tribute to Fleetwood Mac w/ Runnin Down a Dream

-Doors: 8PM | 18+
Rumours is the Southeast’s premier Fleetwood Mac tribute band. Based in Atlanta, GA, Rumours captures the energy of Fleetwood Mac at the height of their career by blending perfect harmonies, precise instrumentation, and a visually engaging stage show. The six members of Rumours are professional musicians with experience across the spectrum of genre – folk, blues, country, rock, and everything in between. Rumours’ diverse background, coupled with a professional approach to the craft, has propelled them to their status as a highly regarded tribute band. Rumours has recreated the Mac experience for a loyal fan base across the eastern United States – selling out venues like The Georgia Theater in Athens, GA, and Daryl’s House in Pawling, NY, and playing to packed House of Blues venues in Orlando, Myrtle Beach, and New Orleans. Do you believe in miracles? Do you believe in the ways of magic? Rumours does! Rumours is Mekenzie Jackson (lead vocals), Doug Easterly (lead and backing vocals, guitar, and percussion), Alex Thrift (lead guitar), Adrienne Cottrell (keyboards, lead and backing vocals), Jerry Tew (bass) and Gabriel Pline (drums).

You may also like the following events from Rumours ATL: A Fleetwood Mac Tribute: