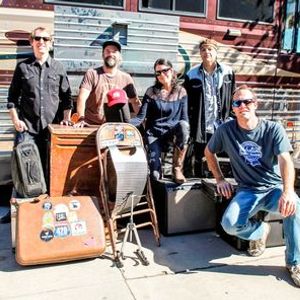 CovidPolicy: Venue entry requires valid ID and proof of a full courseof COVID-19vaccination or proof of a negative lab-conducted COVID-19test taken within 48 hours of the show date for entry into anyevent. The final vaccination dose must occur at least 14 days priorto the event.

*City of Charlotte Mask Mandate - Everyone isrequired to wear a mask. Guests are allowed to remove masksin order to take a sip of beverage.*

Donna the Buffalo joined forces with legendary Producer & Engineer Rob Fraboni to record their new album DANCE IN THE STREET at Sonic Ranch, the world’s largest residential recording studio built around an 80-year-old hacienda on a 3,300-acre pecan orchard right along the Mexican border, near El Paso TX. Fraboni is well known for his work with Bob Dylan, The Band, Eric Clapton, The Rolling Stones, The Beach Boys, Joe Cocker, Bonnie Raitt, as Vice President at Island Records where he oversaw the remastering of the entire Bob Marley catalog as well as producing the soundtrack on Martin Scorsese’s groundbreaking concert movie, The Last Waltz. He built and designed the legendary Shangri-La studios in Malibu to the specification of Bob Dylan and the Band and is referred to as a “genius” by Keith Richards in his bestselling autobiography Life.

Donna the Buffalo offers everything you want in a roots band -- songs that matter, a groove that makes you dance, an audience that spans generations, and a musical voice that evokes a sense of community.

Dance in the Street, their first new album in five years, captures the dynamic energy that has earned the band the love and respect of their fans, “the Herd”, for thirty years.

Donna The Buffalo is well known for their lyrics about human potential and community. Throughout Dance in the Street, Jeb Puryear and Tara Nevins, the band’s co-founders, share songs of social commentary and self empowerment. “We feel the album provides an enjoyable ride between the general and the personal, from both male and female perspectives,” says Puryear.

Nevins and Puryear have nurtured a close friendship after meeting at an old-time fiddle convention years ago. In 1989 they landed their first gig in a Trumansburg, NY restaurant setting Puryear and Nevins on their musical path. During that time, Puryear took note of Nevins’ songwriting ability – “the first person I met that wrote songs that sounded like you could hear them on the radio”. While they mostly write separately, their music is often on the same wavelength.“ Our history is so long and very successful musically,” he says. “She’s my best friend – we’ve done this forever. It’s a big part of what makes it still interesting to do. We definitely have a good, rough-and-tumble, super-longstanding respect and love.”

Donna The Buffalo is not just a band, rather one might say that Donna The Buffalo has become a lifestyle for its members and audiences. The band has played thousands of shows and countless festivals including Bonnaroo, Newport Folk Festival, Telluride, Austin City Limits Festival, Merle Fest, and Philadelphia Folk Festival. At several festivals Donna The Buffalo has become the house band for closing the events by backing up artists including The Avett Brothers, Keller Williams, Zac Brown, Bela Fleck, John Paul Jones, and Chris Thile. They’ve opened for The Dead and have toured with Peter Rowan, Del McCoury, Los Lobos, Little Feat, Jim Lauderdale, Rusted Root, and Railroad Earth to name a few. They also toured with Ben & Jerry’s co-founder Ben Cohen to help raise awareness about increased corporate spending in politics. In 1991, the band started the Finger Lakes Grassroots Festival in Trumansburg, NY. The four day festival has become an annual destination for over 15,000 music lovers every year and was started as an AIDS benefit. It continues as a benefit for arts and education. To date, the event has raised hundreds of thousands of dollars and is now one of three Grassroots Festivals; the Bi-annual Shakori Hills fest in North Carolina and Virginia Key festival in Florida. In 2016 GrassRoots Culture Camp was introduced in Trumansburg, New York as four days of music, art, dance and movement workshops, including nightly dinners and dances.

You may also like the following events from MaxxMusic:

Tickets for DONNA THE BUFFALO can be booked here.