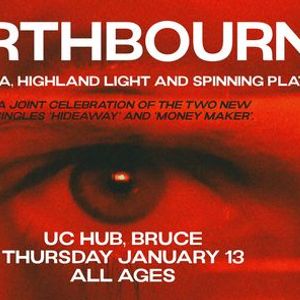 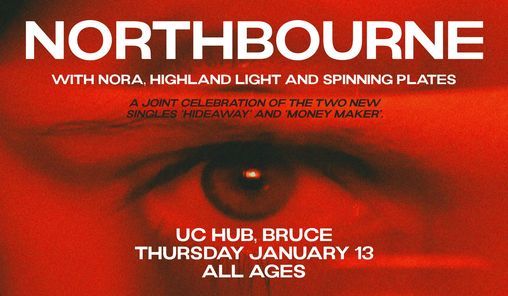 Northbourne have released their new long awaited single “Hideaway” following the success of the launch of their first single “Until I Break” earlier this year. The boys will be smashing out the stage at UC Hub on Thursday 13th January 2022 along with their good friends Nora, Spinning Plates and Highland Light. Doors open at 7:00 pm for this ALL AGES gig that is bound to get everyone headbanging.

First up on the bill will be Nora. Making noises on Canberra/Ngunnawal Country, NORA is a midwest emo band from the mideast of Australia. Regularly playing around Canberra in 2021, NORA is fresh off a sold out single launch for their new track 'monkey grip.

Following them will be the amazing Spinning Plates. Pairing dramatic piano with stirring guitars and hard-hitting drums, Canberra's hard rock band Spinning Plates create a huge sound for a small collective - pushing the limits as to what a trio can do. 2020 was an interesting year, but it did not prevent Spinning Plates from releasing quality, original rock music. Peace of Mind debuted during social isolation - the song being a reflection on how the band were feeling at the time. James Dean dropped soon after, a bridge between the band's debut single and their unique,
heavier sound. The fierce, high-energy single Can We Talk? followed, leaving listeners itching for more music. Happy to oblige, Spinning Plates released more. Finally, the band finished the year
by sharing Spoils of War - a fan favourite at live gigs.

Its then time to get thrashing with Highland light. Emerging from Canberra, 'Highland Light' are an Alternative/Punk Rock Band that create high-energy music! Since forming in 2018, they have
shared the stage with CJ Ramone, Sisters Doll as well as playing countless shows in and around Canberra. They also shared the main stage with other GEM artists at the
Gundaroo Music Festival in 2019. They have released 3 singles which are available on all major online stores and have just released a music video for their latest single 'Absolute'. They are
anticipated to be recording an EP in the near future. For fans of Foo Fighters, Nirvana, Silverchair and Violent Soho.

Headlining this action-packed night of awesomely awesome awesomeness will be Northbourne, a 4-piece grunge band created right here on Ngunnawal land. Since forming in 2019, the group
have truly found their feet with a new lineup & energetic live show that get the crowd going. They have been smashing their way through the Canberra music scene and won’t be stopping any time
soon. Throughout the night you’ll be sure to hear all of their original tracks and crowd-favourite covers, including the brand new single ‘Hideaway’. The boys have been working on and recording heaps of new music and this night is bound to get you excited for what’s in store next.

This event will be the best Northbourne event to date - with your help of course. So come along and make this a night to remember, you don’t wanna miss it!

Tickets on sale now through Moshtix

Tickets for Northbourne: Live at the UC can be booked here.