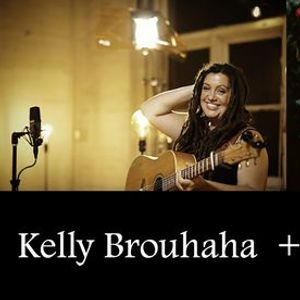 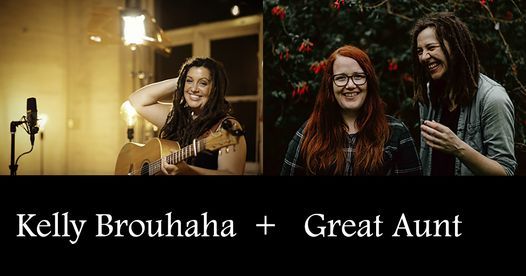 This is a show not to be missed ! Catch two of Australia’s finest Americana artists in concert with Great Aunt (VIC) & Kelly Brouhaha (SA) as the travelling troubadours team up in what is sure to be a collaborative touring highlight of the year.

Known for being some of the best multi-instrumentalists in their scene, these girls are guaranteed to bring a night of fun, frivolity and a whole lot of joy to regional towns right across Australia.

There’s a buzz about Great Aunt: theirs is an eclectic, daring, and joyous approach to making music.
www.greatauntmusic.com

Raw and austere, simple and bold; full of stomping feet and clapping hands, chants and harmonies - that’s the music of Great Aunt.

The duo is a collaboration between songwriter/instrumentalists Megan Bird (mandolin, resonator, acoustic guitar, vocals) and Chelsea Allen (double bass, vocals, percussion). Together, they draw inspiration from the traditions of old time, bluegrass, and gospel music, with a hint of attitude and intention from their diverse backgrounds in punk, jazz, roots and soul music.

The instrumentation and arrangements are deliberately spare and unusual: mandolin meets double bass; muted guitar over percussion; bass drum beneath resonator – theirs is a symphony out of simplicity. Their songs are deeply personal yet endlessly relatable: there’s joy and grief, whiskey and worth, gratitude and purpose-seeking.

“The rhythm of their lyrics and sardonic drawl of their delivery reminds me of the anti folk scene in New York. […] charged with electric wit and armed with the musicalcomplexity of their respective broad influences.” – CQ (USA)

“Great Aunt have been steadily making a name for themselves in the AustralianCountry Music community with their tight harmonies and instrumentals that areelegant in their simplicity.” – Not a Sound (USA)

“Sierra Hull meets Tom Waits in Louisiana, you could say. I’d jump on thebandwagon now; these ladies are going to be HUGE!” – Country Update Magazine(AUS)

"She's known for having an extraordinarily rare voice." - CLARE BOWDITCH

The South Australian Award Winning Songwriter is one of those artists who's unique style simply cannot be put into a box. From big blues to soulful country, it is music that is real and raw and vulnerable.

"It's just so much fun, that girls got amazing pipes, she sounds like Amy Winehouse - but with more of a soulful edge as opposed to a jazz hook." NKECHI ANELE - TRIPLE J ROOTS AND ALL

Releasing her debut album in 2019, the Americana artist has had many a success including ABC radio rotation, #1 AMRAP radio charting and inclusion on hit country Spotify playlists.

Whether around a campfire, in RSL's or in the intimate setting of people's living rooms - this is an artist you simply need to hear. Her captivating live show will have you giggling one minute and in tears the next as she tells stories about her travels, her family and her much loved 1992 Toyota Hiace "Pamela Vanderson".

"I really don’t know if we have anyone similar in Australia, I am pretty sure that we don’t. She has similar elements of other artists from overseas, and maybe a touch of Renee Geyer, but basically, she is a one-off. In a close tunnel genre in Australia, Kelly is Queen. She is a no-nonsense, firebrand" COWGIRL UP BLOG

Tickets for Great Aunt + Kelly Brouhaha can be booked here.