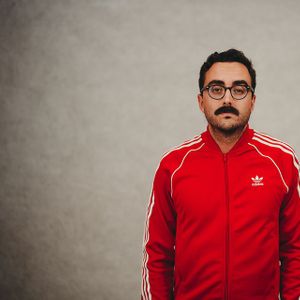 One of Australia's most exciting stand-up comedians is on his first national tour - and he’s coming back to Smith’s Alternative in Canberra for an encore after a sold-out show in April.

Comedian Daniel Muggleton and his trademark red tracksuit are touring Australia in 2022.

Fresh from sold-out shows across the UK, 5 star reviews at comedy festivals around Australia and over 15 million views on social media, don't miss the latest hour from stand-up's foul-mouthed prophet.

Daniel's debut special 'Let's Never Hang Out' aired on ABC Comedy in 2019 & 2020, and is currently streaming on Amazon Prime. He's also been hand-picked to support Jim Jefferies, Steve Hofstetter & Neel Kolhatkar on tour, in addition to performing at the Sydney Comedy Festival Gala in 2021.

Press for Daniel Muggleton:
‘A foul-mouthed prophet’ - The Advertiser
'A comedian with something special’ - WeekendNotes
‘Not a 6pm comedian' - The Age
‘Never preachy... deceptively smart.' - Chortle
'Wickedly enjoyable' - British Comedy Guide
'Mastered the Art of Crafting a Joke' - Radio Haha

Tickets for Daniel Muggleton in Canberra - Australian Tour 2022 can be booked here.