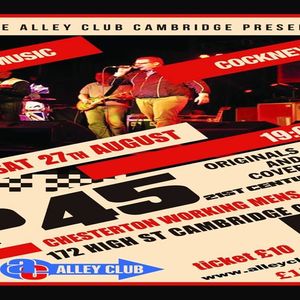 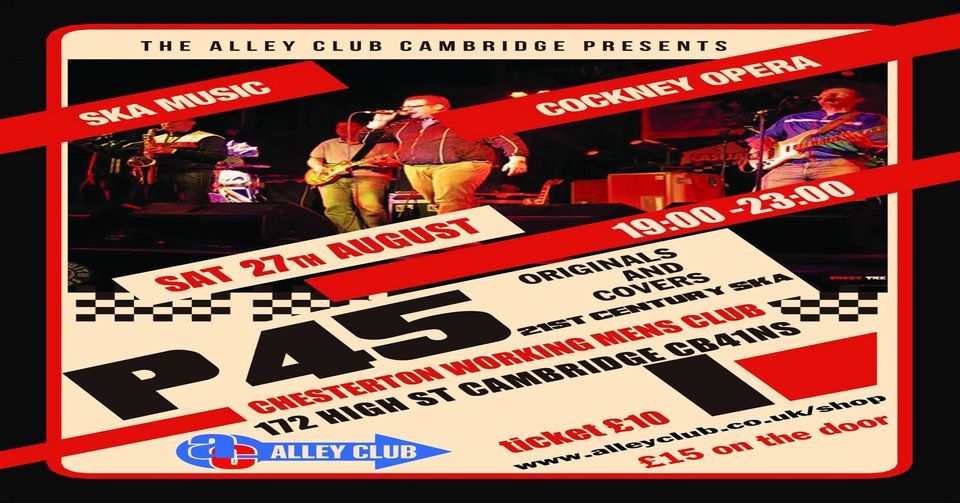 Unfortunately, due to corcumstances beyond our control, this gig will have to be postponed til Feb '23. Potential dates are 4th, 11th or 18th Feb. You'll be the first to know once a date is confirmed!

P45 are a 21st century modern Ska influenced band that have been dubbed the
creators of a new genre called “cockney opera”. It was the late great
legendary Chas Hodges of Chas & Dave who gave P45 this exceptional title
while supporting them at the O2 in London (amongst various other venues
such as The Concorde 2).

P45 are an original material six piece that have been
compared to so many other great bands such as Madness. One review said
“P45 could be the modern-day Madness”. Other reviews had called P45 the
lovechild / mix-up of artists such as Ian Dury and The Streets.

P45 are a real
working class group, members are real world people living with what is
called real problems, such as unemployment, rent and council tax arrears,
repossession, drink, drug and prescription drug problems and everyday issues
like finding a few quid for petrol to get to work and doing whatever needs to
be done to get by. Normal people must duck and dive. Buy and sell things that
are considered “black market” to those who look down on us, but in reality, at
this time and moment of which looks like it could go on for a long time we
could all do with knowing “that bloke” who gets bits and pieces. P45 is made
up of all those types of characters. Hard working, family loving, couldn’t do
enough, providers. Some P45 members work two jobs to make ends
meet, two jobs but forever in debt. Some members are unemployed and have
no choice but to sign on and are tagged by others as scroungers. The people we
represent are just getting by, but will do whatever needs to be done to provide
the best they can for the family. Very often, or almost constantly, MANY artists /
bands that have come before us and that are around now, either established or
becoming established, love to use the “council estate” “cockney” “working
class” “had it or having it tough” slogan to portray an image. All these said
types are often living off mummy and daddy and have never had any worries at
all. I would like to mention some names but apparently it isn’t the done thing.


P45 are the real deal and that is shown and told in our music, music that is
loved by every person who hears it, from all ages and all backgrounds.
The band’s debut album “Stories To Be Told” saw some success with two
chosen tracks being played on national radio (XFM and the BBC) as well as
many community internet local and hospital radio stations. P45 have
supported artists such as Simply Red, Madness, Bad Manners, Steve Craddock,
Bruce Foxton and many more. The band have also shared the stage and lined
up alongside established bands such as The Dualers, The Beat, The Selecter and
The Specials. Not only have P45 played venues such as Grays Civic Hall, The
Circus Tavern Santa Pod Raceway and Islington Assembly Hall, they played to a
sell-out audience which saw crowds of up to 2000 and up.


Throughout 2022 P45 plan to release three singles and a second album which
is due to be released in December. Our first single of the year titled “Rush
Green Road” has a slightly different sound and feel too what P45 are normally
known for. The band's second single “Style” was released on May 16th.
.
P45 was founded around the years of 2011 – 2012. During this time the band
would gain a lot of attention by the industry and build up a loyal cult following.
The band would be signed to an independent record label put together by a
consortium of Essex businessmen. Around 2016 P45 members would
eventually agree that a cooling off break was needed, and we would get back
to work after six months. Those six months turned into five years. The band
was reformed by the two core original members Rob Sigston (bass guitar
player/song writer) and Jack Kendall (lead vocals). The reforming also lured back
the amazing, well known, well respected trumpet player UB40’s (to name one!)
Colin Graham, also an original member. In 2022 P45 will be touring all over the
UK promoting the bands brand new and upcoming releases. P45 are back, bigger
and better than ever and are working hard on reaching as many people as
possible from all over the world. The band are currently looking into touring
Europe in 2023.

You may also like the following events from The Alley Club Cambridge: