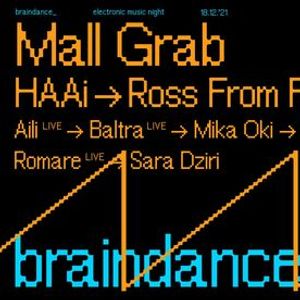 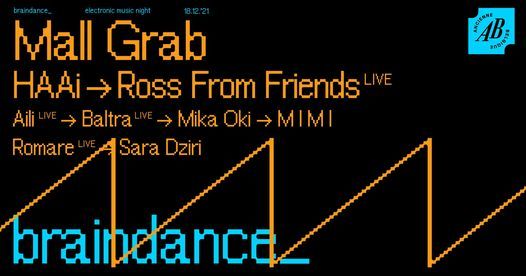 braindance_ offers a platform to cutting-edge DJs, bedroom producers and groundbreaking live electronica acts in the spirit of the infamous Boiler Room Sessions. Expect a night of mind-blowing musical discoveries that will get both your dancing legs and brain cells working.

On Saturday 18 December, braindance_ breaks out far beyond the walls of the AB Club. For one night, the entire AB Complex turns into a hot nightclub in the heart of Brussels. Think all out, all night long, with heavy hitters in the main hall and a playground for new, unknown electronica in the AB Club. Ready to reach higher realms? Our line-up certainly is.

Jordon Alexander aka Jordy aka Mall Grab is a ball of pure energy and positivity. The Australian DJ and producer is one of the leading figures in the lo-fi house scene, with 25 (!) EPs and single releases over the last six years. His two-hour DJ set will form the perfect ending to this braindance_ all-nighter edition.

In 2018, Felix Clary Weatherall aka Ross From Friends performed at the very first edition of braindance_ in the AB Club. Three years later, on the eve of the launch of his second album “Tread” released on Brainfeeder (on 22/10), he’s completely ready for the big stage. The British producer with the bizarre name delivers a super-danceable funky live show full of technical ingenuity.

We first met Baltra through 박혜진 Park Hye Jin at Braindance 2019. He produced their track “Ahead Of Time”. The American producer grew up in Philadelphia but now lives in New York. His sound drifts between romantic and melancholy. His electronic live sets are crammed with tunes that race through your body during those solitary headphone moments but really come into their own on the dancefloor.

British producer Archie Fairhurst, better known as Romare, is a real tinkerer. He’s a drummer, a guitarist, plays with samplers, creates and processes his own recordings and messes around with them, ultimately fashioning them into amazing songs. It’s no wonder that his musical home is the legendary Ninja Tune label (Maribou State, Floating Points, Bicep, Bonobo, etc.).

Things are happening fast for the Brussels/Ghent duo Aili. Since winning Studio Brussel’s De Nieuwe Lichting, they have played at countless festivals and their debut EP “Dansu” was well-received. Live, they offer a catchy, danceable mix of electronica sprinkled with Japanese vocals.

Mika Oki lives somewhere between Brussels and Paris, where she works as a producer, visual artist and DJ. In October she’s working at AB on a live AV show for Sky H1. Her sets are stuffed with jungle, UK bass, gqom and even dark electro, trance and EBM. Mika takes it upon herself to create the right atmosphere, with a sculptor’s eye for detail, to match whatever is in the air on a given night.

In 2018, HAAi beat Four Tet and Avalon Emerson to win the “BBC Essential Mix of the Year Award”. A year later, she released her first EP “Systems Up, Windows Down” on the legendary Mute Records (New Order, Depeche Mode, Kraftwerk, Apparat etc). It’s obvious that this Australian is not short of talent. Teneil Throssell – her real name – now lives in London and travels the world with her thumping DJ sets full of dark and trippy sounds.

Sara Dziri is a familiar figure at AB. The Brussels native made the catchy jingle for our “Guestlist” podcast. As well as a producer, sound designer and performer, she’s also a fine DJ. Her surprising, rhythmic house and techno is therefore the perfect ending to this edition of our AB Club.

M I M I never fails to heat up the dancefloor with her blend of electronic music and hip-hop with European and African influences. In late November, the resident DJ of Brussels’ The Word Radio plays the Boiler Room festival in Barcelona, but soon afterwards she has a lively home fixture for you at AB.


﻿Some of these shows are Liveurope concerts:

Tickets for braindance_Mall Grab, Ross From Friends, HAAi,... | AB can be booked here.