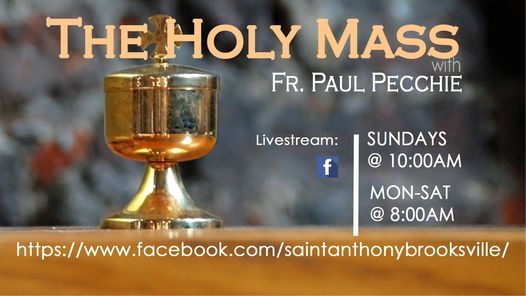 In an effort to keep us all spiritually close while we are physically apart, we will begin livestreaming Fr. Pecchie's private Mass from St. Anthony The Abbot daily at 8:00am EDT starting on April 2nd and every Sunday at 10:00am EDT thereafter.

Also check out other Virtual Events in Brooksville.

Search by related topics in Brooksville
religion
Share With Your Friends 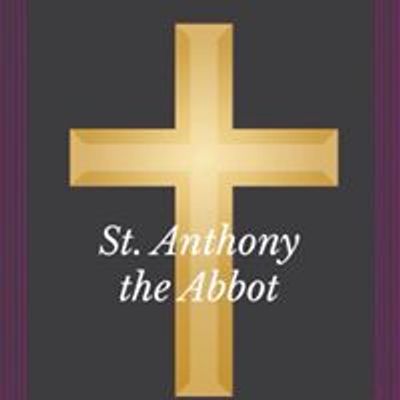 St. Anthony The Abbot Catholic Church
Follow Contact
About The Host: The first Catholic Mass in Brooksville was held on Easter Sunday, 1874 and during the following years the Catholics of Brooksville were provided with a priest from St. Anthony's parish in San Antonio to attend to religious matters. Beginning the summer of 1902, the priests of St. Leo Abbey came regularly to Brooksville to celebrate Mass for the Catholics of Hernando County. In 1908, the Catholic Women's Club was formed for the purpose of raising money to build a church. The Hon. A. H. Hirst of Haverford, Pa. heard of the ladies efforts and offered to pay for the construction of a church named for his deceased son, Anthony Jr. For this reason, the Church is called St. Anthony and was built on Olive Street in 1908 (this church is still standing but is now a private home.) By 1963, the church had become inadequate for the needs of the congregation, and so a new provisional church and school was built. The dedication took place on Thanksgiving Day, November 28, 1964. St. Anthony's primary school opened for the first time September 5, 1967. However, from the onset, the debt incurred in this move, coupled with an attempt to operate a parish school for a very few children without the aid of teaching Sisters, proved to be a burden beyond the financial means of the small Catholic Community. This entire piece of parish property was sold to the Hernando County School Board. After months of careful evaluation, Bishop Charles McLaughlin negotiated a contract, purchasing a site on State Road 577. The new St. Anthony Catholic Church was blessed and dedicated by the Bishop on December 27, 1970. The original building could accommodate about 350 people for Mass in the Church and the adjoining hall could be opened to seat another 100 people. The building also contained five small rooms, originally designated as classrooms and offices and a kitchen and dining room. In 1988, expansion again became necessary as there were over 1200 families registered in the parish. Because of this growth in membership, the present church was renovated to increase the seating capacity. The exterior and interior has been made more attractive and contemporary in design. In 1999, renovations were again under way. Due to the construction of Cortez Blvd., the decision was made to add a Commons Area which would help defray the noise from the highway, and also become a meeting place for our parishioners.
Website Link: http://www.stanthonytheabbot.org
Are you the host?
Nearby Hotels St. Anthony The Abbot Catholic Church, 20428 Cortez Blvd, Brooksville, United States
Report a problem ?