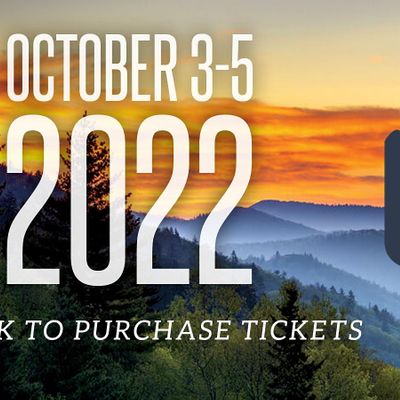 The 2022 Mountain Top Conference is heading back to beautiful Branson, Missouri! Don't miss this exciting event packed with powerful preaching from Dr. James Merritt, Pastor Ed Newton, and Pastor Jon Nelson plus inspiring music from Big Daddy Weave and The Martin's. (See below for details)

This year's conference will be held in one location - the renowned Mansion Theatre. Many new additions to the 2022 schedule include a hymn sing and a time spent with Dr. James Merritt answering your questions about ministry, the culture today, and the Bible.

You will leave relaxed, refreshed, and renewed after spending time in the beautiful Ozark Mountains with old and new friends. Join James and Teresa Merritt and make plans to be part of the 2022 Mountain Top Conference!

James Merritt is the host of Touching Lives and one of the most dynamic, Gospel-centered preachers on air today. Dr. Merritt strives each week to deliver God's truths in a clear and concise manner. His pure passion is to reach lost people all over the world with the life-changing and life-saving Gospel of Jesus Christ.

His formal education includes an undergraduate degree from Stetson University and Master of Divinity and Doctor of Philosophy degrees from The Southern Baptist Theological Seminary in Louisville, Kentucky. His pastoral service includes pastoral positions with churches in Kentucky, Mississippi, and Georgia. He regularly preaches outside his home church as he is frequently called to preach, lead pastor training courses, and minister directly to people all over the world.

From 2000 to 2002, Dr. Merritt served as President of the Southern Baptist Convention, which is the world's largest Protestant denomination, and he has appeared on numerous television programs including Hannity and Colmes, Scarborough Country, and 60 Minutes.

Dr. Merritt has been married to his wife Teresa for over 40 years and have three sons, a daughter-in-law, and four grandchildren.

Dr. Ed Newton is the lead pastor of Community Bible Church, in San Antonio, a 27,000 member congregation, a multiple campus, missional community of multigenerational, multicultural disciple makers who seek to initiate and celebrate life change in Jesus' name. Pastor Ed and his wife, Stephanie have four children in London, Lola, Liv, and Lawson. Together they seek to lead a generation of people to hear God's voice and respond in extreme faith in obedience.

Dr. Newton is an author, speaker, and leader with an intentional burden to speak into the capital “C” church towards revival, leadership, evangelism, discipleship, leadership, missional living, and especially for the “next” generation to become a “now” generation. Pastor Ed Newton received his formal training from several institutions such as earning a Bachelor of Science in Church Ministries from Clearwater Christian College, Clearwater, Florida, a Masters in Religious Education from Mid-America Baptist Theological Seminary in Memphis, TN, a Masters in Divinity, and Doctorate of Ministry in Pulpit Communication from Trinity Theological Seminary, Newburgh Indiana.

Raised between the country and the inner city of Kansas City, he attended a local Missionary Baptist church and there quietly declared his atheism. Not until college did he read the Bible cover-to-cover which began his journey towards Jesus. After receiving Christ Jon immediately began pursuing changes that led him from an avid atheist to a pastor. Years later, Jon graduated from Midwestern Baptist Theological College after leaving Westside Family Church as the College, Young Professionals, and Single Adults Pastor.

Jon is a passionate communicator, innovative thinker, and leader of communities that call participants to lives that make much of the glory of God. Jon endeavors to be a resource enabling people to effectively reach their community by leading Biblically faithful and culturally relevant lives. His greatest joy outside of Jesus is being married to his wife Heather and being a dad to their children.

A contemporary Christian rock band, Big Daddy Weave formed in 1998 in Mobile, Alabama, where the bandmembers, Mike Weaver (guitar, lead vocals), Jay Weaver (bass, vocals), Jeremy Redmon (guitar, vocals), Jeff Jones (drums), and Joe Shirk (saxophone, keyboards) were all attending school. Led by Mike Weaver's strong lead vocals and songwriting skills, the band grew into a successful recording and touring act, and has released several albums, including Neighborhoods (independently released in 2001). The rest were released by Fervent and included One and Only (2002), Every Time I Breathe (2006), and The Ultimate Collection (a compilation of previously released key tracks that appeared in 2011), among others. The band returned in 2015 with Beautiful Offerings, their seventh studio album.

Siblings, Joyce, Jonathan, and Judy, collectively known as The Martins, have enjoyed countless radio hits and performances at concert halls, arenas, auditoriums, and churches worldwide. During the 1990s, The Martins rose to national and international success, showcasing their stunning and distinctive harmonies before a vast array of audiences, from legendary singer/ songwriter Bill Gaither’s multi-award winning Homecoming Video and Concert Series to the White House to Carnegie Hall. Over the years the Trio garnered eight Dove Awards from the Gospel Music Association, as well as a prestigious Grammy nomination.

You can cancel up to 30 days prior to the event for a full refund, less the Eventbrite fees which are not refundable. Once we are 30 days or less from the event, no refunds are available as the ministry will lock in your spot and fund the expenses in anticipation of you joining this event.

Tickets for Mountain Top Conference 2022 can be booked here.

Touching Lives
Follow Contact
About The Host: Touching Lives is the international broadcast ministry of Dr. James Merritt, reaching all 50 states and over 140 countries and territories around the world, with the hope and encouragement of Jesus Christ!
Website Link: www.touchinglives.org
Are you the host?
Nearby Hotels The Mansion Theatre, 189 Expressway Lane, Branson, United States
Event details from Eventbrite Report a problem ?