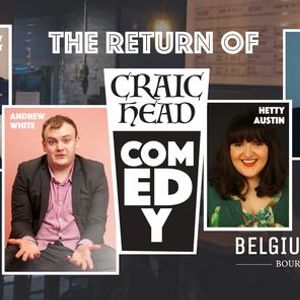 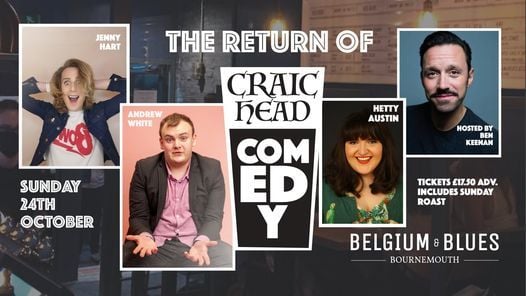 Craic Head Comedy is back on Sunday 24th October!
Come along and enjoy an evening of cracking roast dinners, awesome craft beers and of course some fantastic comedy!
Hosted as always by Bournemouth's very own Ben Keenan almost a year on from our first Craic Head night back in the dark days of 2020!

This time headline and support are provided by;

Andrew White - "Flamboyantly repressed and optimistically cynical, Andrew White is a stand-up fast rising through the comedy ranks with an act that's "not to be missed"" (Daily Record).

Hetty Austin - HETTY AUSTIN is an up-and-coming Portsmouth comedian with a lot of charm, energy and natural comic ability.

With material covering everything from the perils of being a hairy woman, to romance and video games, Hetty has a wealth of hilarious anecdotes to dip into and weaves them together with ease.

Arrival is 6.30pm for food at 7pm - Comedy to follow shortly after!

You may also like the following events from Belgium and Blues Bournemouth: