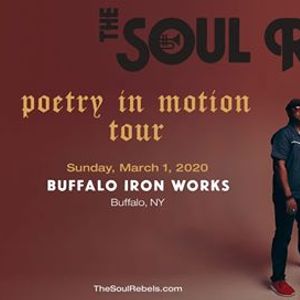 About The Soul Rebels:
The Soul Rebels are riding high in 2019, receiving national attention with recent performances with Katy Perry and DMX, and featured on NPR's Tiny Desk series, a debut late night TV appearance on The Late Show with Stephen Colbert, and a headlining set at the TED Conference. The band continues to expand its international reach touring four continents including Europe, Australia, China, South Korea and Japan. Their explosive stage presence has led to live collaborations with the likes of: Nas, G-Eazy, Robin Thicke, Macy Gray, Portugal. The Man, Robert Glasper, Pretty Lights, Curren$y, Joey Bada$$, Talib Kweli, GZA, Macklemore & Ryan Lewis, Mobb Deep, Raekwon, Metallica, and Marilyn Manson among many others, and opening for Lauryn Hill and Nile Rodgers.

The Soul Rebels started with an idea - to expand upon the pop music they loved on the radio and the New Orleans brass tradition they grew up on. They took that tradition and blended funk and soul with elements of hip hop, jazz and rock all within a brass band context. The band has built a career around an eclectic live show that harnesses the power of horns and drums in a deep pocket funk party-like atmosphere. The Soul Rebels continue to chart new territory as they feature in major films, tour globally, and combine topnotch musicianship with songs that celebrate dancing, life, funk and soul.

Most recently The Soul Rebels released their new album, Poetry in Motion. The album puts the band front and center and showcase the wide breadth of musical genres and special collaborations that have come to identify the musically chameleon-like band.

Since 2007 The Big Easy in Buffalo has connected Louisiana performers to the Greater Buffalo community through live performances and community engagement by bringing bands from Louisiana to town for concerts that are open to the public for free or at an affordable rate, and while they are here pairing them with either local professional or student musicians for mentoring, professional development, or music education sessions.

You may also like the following events from Buffalo Iron Works:

Tickets for The Soul Rebels 'Poetry in Motion' Tour w/ Chuckie Campbell can be booked here.