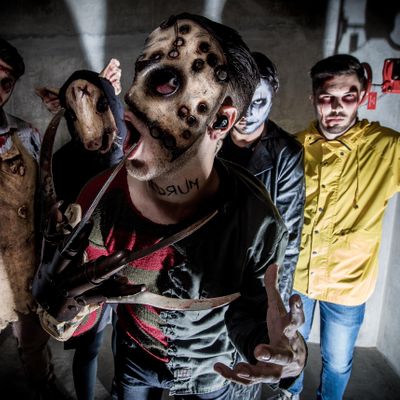 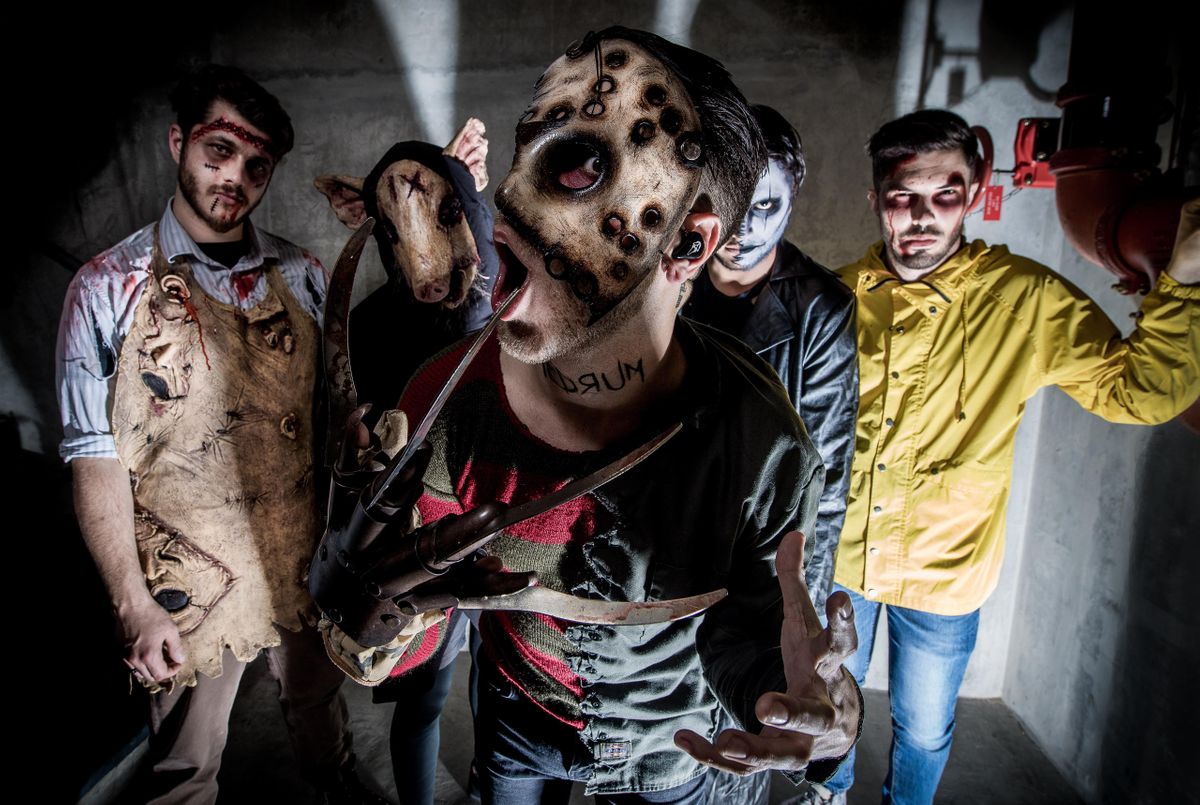 All tickets are non-refundable.

In a landscape littered with celebrity fakes and would-be influencers, ICE NINE KILLS stand apart. Visionary trailblazers and multimedia raconteurs, INK has steadily built a thrilling new underworld for a growing legion of devoted true believers, with theatrical shows, high-concept videos, and inventive band-to-fan communion. Ice Nine Kills summon the most captivating elements of metal, punk and hard rock and combine it with melody, cinematic obsession, and a literary fascination. Loudwire hails them as “one of the most unique acts in metal right now,” a declaration supported by the band’s Billboard Hard Rock Albums chart topping slab, The Silver Scream. 13 songs of devilishly devious odes to classic horror, The Silver Scream generated anthems for the disenfranchised and subculture obsessives, like “The American Nightmare,” and broke them into Active Rock radio.After a decade of studio wizardry and live theatricality, ICE NINE KILLS draws favorable comparisons to rock icons like Slipknot, Rob Zombie, and Marilyn Manson, via a likeminded synergy of music, lifestyle, and cult following reverence. ICE NINE KILLS is at the forefront of the natural crosspollination of subcultures. “Heavy music and horror are both escapes from our mundane struggles,” singer Spencer Charnas points out. “You could be having the worst day, then you put on a great metal record or horror movie and forget about all of your problems.”

Produced by Noah and Jolly, the ten-track trip unfurls like the sonic equivalent of a gripping existential drama.

“What makes us a rock band is the fact we play instruments, but we’ve always been pretty experimental in terms of post-production,” explains Noah. “We dove after a specific sound without boundaries. What separates us is the attention to detail in every song.”

Bad Omens diligently worked to hone this approach since their 2016 self-titled debut. As the entire tracklisting tallied nearly 30 million streams, the breakthrough single “The Worst In Me” leapt past the 8 million mark on Spotify. Meanwhile, “Glass Houses” clocked 4.7 million Spotify streams, “Exit Wounds” racked up 2.6 million Spotify streams, and “Reprise (The Sound of the End),” “The Fountain,” “F E R A L,” and “Enough, Enough Now” each exceeded 1 million-plus on the platform. Along the way, they received looks from Alternative Press, New Noise, and Revolver and toured alongside everyone from Parkway Drive to Bullet For My Valentine and Asking Alexandria. Following Warped Tour 2017, the group commenced writing for what would become Finding God Before God Finds Me.

In addition to expanding the sonic structure under the influence of the Hillsong UNITED and other gospel production, Noah endeavored to brighten up the thematic palette as well.

“The last record was so melancholic, sad, dark, and nihilistic at points,” he admits. “Before we started really writing the new record, I went through some things that opened up my mind and made me realize who I wanted to be as a musician, what message I wanted to send, and the feeling I needed to inspire. This is predominantly hopeful. There’s a sense of underdogs overcoming adversity. We should be a safe place for people. There’s also a musical feeling of uplifting catharsis. It’s not entirely happy or sad, but more so regal.”

This drove 2018 singles “Careful What You Wish For” and “The Hell I Overcame.” Fans immediately responded as the former generated 1.5 million Spotify streams and the latter quickly neared 2 million. With Jolly a world away in Sweden, they finished the record remotely, maximizing the time in between tours to cap off a panoramic vision.

The 2019 single “Burning Out” couples strains of piano and choir with trudging distortion and a sweeping and soaring chant of empowerment, “I was lost, but now I’m found under the lights and in the sound.”

“It’s about the impact music has made on me and how it saved me in a sense,” he continues. “It’s about my relationship with myself and music and how I overcame my emotions and took advantage of this ability to reach a better place. I wanted the lyrics to give you a sense of hope.”

Evocative of the experimentation, the album slips from choral elegance into a Spaghetti Western-style swing on opener “Kingdom of Cards.” The conclusion “If I’m There” climaxes on a beautiful reprise, “Well if I’m there to catch you when you fall, you’ll have a friend down in hell after all.”

“In some ways, it’s a love song,” he adds. “It’s also a song of forgiveness and acceptance, which is why it’s the end. I’m drawing a line in the sand and forgiving. This is something I never would’ve done in our stuff before.”

By imparting a piece of themselves on every aspect of the composition and production, Bad Omens deliver a statement that stands out.

“We just want you to feel something,” he leaves off. “Nothing in the world is stronger than emotion. It makes us human, gives us soul, and separates us. We tried to make this album like a movie where it captivates you immediately, takes you on a journey, and gives you a positive payoff.”

CURRENTS is the new standard for death-infused metalcore. This is emotionally fraught and impossibly angry music soaked in cold, depressive atmosphere. CURRENTS explore the forbidden realms of a tortured psyche, searching for meaning amidst uncertain chaos and venom. Heartache, physical abuse, abandonment, trauma – no dark emotion is spared examination. CURRENTS also turn their gaze outward, offering no mercy to man-made catastrophes like climate change and animal abuse. An exploitative system that inflicts such harm upon humanity and the entire world will not be spared the wrath within this explosive, weaponized bombast.

The Way It Ends, the second full-length from the Connecticut bruisers, is a thematic and spiritual successor to their dense, bludgeoning, and smartly constructed full-length debut, The Place I Feel Safest (2017), and a direct follow-up to the blistering and diverse EP, I Let The Devil In (2018). Those well-versed in Meshuggah, Humanity’s Last Breath, Vildhjarta, and Architects have embraced CURRENTS with full-throated passion. A combination of their contemporaries and influences, channeled through unique perspective and personal experience, resulted in something revolutionary. It’s why they were handpicked for tours with August Burns Red, As I Lay Dying, We Came As Romans, Fit For A King, Born Of Osiris, and the Impericon Never Say Die! Tour. As New Noise declared: “CURRENTS is a band not to be ignored.”

Fame On Fire is genre-defying and pushing the boundaries of rock, hip hop, and heavy music, by unapologetically being themselves. Unpretentious, honest, and boldly brash, Fame On Fire has delivered a diverse, energetic, and emotionally-wrenching collection of songs for their debut album, LEVELS. Holding multiple meanings, LEVELS, is both about going through the motions of life, the various levels, ups and downs that all people can relate to, and about the quest to level-up and continue to progress and move forward. This dichotomy defines a band that is not willing to stand still or be complacent, but one that continuously tries to evolve their sound and craft.

Leaving absolutely nothing on the table, Fame On Fire self-produced, tracked, and mixed the album on their own, in the studio they built, laboring over every lyric, chord, beat, and riff, and painstakingly polishing every track. On “Her Eyes” - the band’s first #1 song on Sirius XM Octane - singer Bryan Kuznitz explores the turmoil of surviving an emotionally abusive relationship with the brutal honesty of someone who wants to push through any challenge and remains hopeful in getting to the other side.

It is this hopefulness that ultimately prevails in an album that doesn’t shy away from themes of anguish, loss, and toxicity in relationships and life. Whether it be fighting demons and breaking out of the internal Pr*son of the mind in “HEADSPACE FT. POORSTACY” or swimming consciously through a downward spiral in “Down,” Fame On Fire paints a visceral portrait of the uneven journey of life that we all go through and that we can all get through together. Through the darkness comes a flicker of hope that shines through to a new day.

With LEVELS, Fame On Fire set out to show how important music is for the band and their fans. According to guitarist, Blake Saul, “Our band exists because all of us grew up together and we each found our own ways to music, which is living and breathing inside of us.” LEVELS proves that Fame On Fire is ready to help define a new era of rock music. Just don’t call Fame On Fire a cover band.

All Sales Final - tickets are non-refundable.

The maximum number of tickets available per purchase for each event is the maximum number permitted per customer. Eventbrite and Iron City reserve the right to cancel any orders in excess of the stated ticket limit.

Any tickets suspected of being purchased for the purpose of reselling can be cancelled at the discretion of Iron City/Eventbrite.

For Will Call pick up, name on order must match the credit card used for purchase & photo ID must be presented at box office to obtain tickets. No exceptions.

Tickets for Ice Nine Kills: Hip To Be Scared: Severed Leg 2 can be booked here.