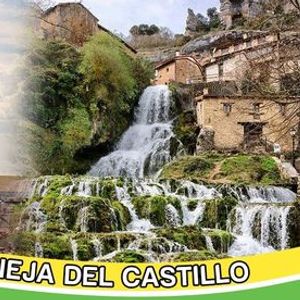 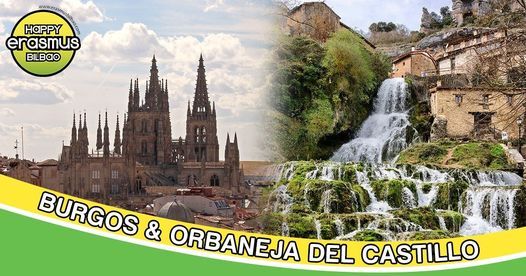 Do you want to spend Saturday in a nice company??, at beautiful places? and discover a bit of Spain??? Then join the Happy Erasmus familia for the trip to Burgos & Frías!

?BURGOS?
?A bit about the city:
It is the historical capital of the northern Spanish province of Castile.??
This city was founded✴️ in 884 through the construction of a castle, that was built in order to protect⚔️ the villages or ‘Burgos = towns’. At the time, most villages worked in the agriculture?? and were part of an essential wool trade? with the Netherlands.??
After the reconquest of Spain?? the villagers began to abandon the central zone that was closed off ⛔️by the city walls, and started to establish themselves in the city of Burgos, as we know it today.✅
However, from the ?16th until the 20th century the city suffered from a massive decline ? in population.?‍?‍?‍?

?The cathedral of Burgos
-This Gothical cathedral was founded✴️ in 1221. Between ? the 15th and 18th century it has sufferes from different strucutral modifications and additions.?

?The Arco de Santa María
-It is one of twelve 1️⃣2️⃣ city gates, which were the only entrance to the fortress of these different villages in Burgos during the middle Ages.✅ It was built in the14th century, but renovated completely in 1553 to give it its characteristic white colour ⬜️◻️– the colour of the most important buildings in Burgos that are built with limestone.? It used to be the town hall ? of the city.

?The promenade of Espolón
-It is the most famous and busiest promenade of the city. Nowadays, it offers a peaceful walk-way ?‍♂️?‍♀️ along the trees? for everyone, but it is important to note that during the 20th century up until the civil war this promenade was strictly ⛔️ divided into different zones, one for each social class.?

?ORBANEJA DEL CASTILLO?
?A bit about the city: Orbenaja del Castillo, a town crossed by a beautiful waterfall,? full of fairytale houses,? turquoise-blue pools and viewpoints.? This is how you can describe this amazing town at the very border of Cantabria. ?
Any time of the year is good to walk through the narrow medieval streets that characterize this jewel.✨ Happy Erasmus Bilbao decided to take you to this magical spot in the autumn,?? so you can enjoy the a bit chilly atmosphere with your Erasmus friends.??‍?

?Cascada de Orbaneja del Castillo
It looks like staircase, it is 25 metres high⬆️ and its idyllic!✨? This waterfall ?is running between the stone houses of the town and creates an incredible image.? It’s not ordinary waterfall, the terrain is a bit special, so the stones create small terraces.?

?Cueva del Agua
This cave ⛰is the point, where the river, that creates the spectacular show of the waterfall, springs.? You can even see ? the cave directly from the main square? of the town!

?The city itself
The town, that has only 50 registered ?inhabitants, has its roots in the Medieval Age, which is quite easy to guess as one look at the style of the small houses gives you a good hint. ? The town is also protected by the natural “walls” of the Ebro river Canyon.⛰

⚠ Don’t forget to bring with you:
your Passport/ID Card with you
some food ??
an umbrella ☔

You may also like the following events from Happy Erasmus Bilbao:

Also check out other Workshops in Bilbao, Trips & Adventurous Activities in Bilbao.
Search by related topics in Bilbao
class trip to
Share With Your Friends