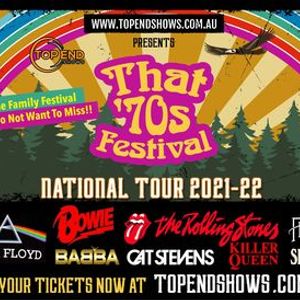 With one of the most amazing line up of seventies tribute bands in Australia.
This will truly be a family affair!

The Beatles – Lennon and McCartney met while playing in a skiffle band! from the early 1960’s to the mid 1970’s they took over the music industry and their success made them the influential band they are in the music industry today. The fab four became the biggest name in the music industry worldwide.
The Australian Beatles - are a world-renowned Beatles tribute band. pre-Covid, the show was on a constant world tour, with performances in Hong Kong, Singapore, Japan, New Zealand, China, Malaysia and Australia. The Australian Beatles superbly reproduce the sights and sounds of the greatest band in history. Some of the songs they will be performing - A Hard Day's Night – Yesterday – Help - Strawberry Fields Forever - She Loves You.

Simon & Garfunkel - were far from your average folkies, their music is timeless! Paul Simon and Art Garfunkel became the darlings of the folk-rock, countercultural movement of the late 1960s, selling millions of albums and performing sold-out shows across the globe.
Harry Baulderstone & Marcus Ryan – pay tribute to Simon & Garfunkel, there hasn't been a tribute show quite like this one, you’ll be captivated by the award-winning voices and beautiful harmonies. Including classics like - Mrs Robinson – The Boxer – Feelin Groovy – Sounds of Silence.

Pink Floyd – psychedelic and mind-blowing, Pink Floyd pushed the boundaries using new techniques, such as tape-loops, feedback and echo delay which made them stand alone from the rest. The band earned a place on the ultimate roll call of rock, along with the Beatles, the Stones and Led Zeppelin.
Echoes of Pink Floyd - replicate this sound and image of Pink Floyd, bringing their act to Darwin for the first time, you will not be disappointed! With songs like - Comfortably Numb – Time - Shine On You Crazy Diamond – Echoes – Money - Another Brick In The Wall.

Cat Stevens - resonated with audiences worldwide and his songs were embraced by a generation as anthems of peace and unity. In the late 1960’s Cat Stevens ascended into the upper echelons of musical superstardom. We all know and love his songs!
Colin Lillie - with his amazing voice, Colin brings Cat Stevens to life, the songs will take you back to the music that changed an era, sing along to your favourites - Father & Son – Wild World – Peace Train – Where do the Children Play

David Bowie - A leading figure in the music industry, Bowie is regarded as one of the most influential musicians of the 20th century. He was acclaimed by critics and musicians, particularly for his innovative work during the 1970s. Bowie was famous for his reinvention and visual presentation, with his music and stagecraft having a significant impact on popular music.
Major Tom - Stars the amazing Tom Jennis as David Bowie. The show reproduces in stunning detail David Bowie’s distinctive vocal style and visual flamboyance, effortlessly taking audience’s through the shifts and turns of Bowie’s incredible musical legacy. Songs include - Rebel Rebel – Sorrow - Ziggy Stardust - Ashes To Ashes – Starman - Space Oddity - We Could Be Heroes.

The Rolling Stones - They have released 30 studio albums, 23 live albums, 25 compilation albums and 120 singles. The Stones are ranked the fourth bestselling group of all time. Their top single is, I Can't Get No Satisfaction.
Jumpin Jack Flash – Jumping Jack Flash are Australia’s longest running and most respected tribute to The Rolling Stones. They have performed throughout Australia and Asia. The five-piece live band perform at full throttle, they thrill audiences of all age groups and all nationalities, you can expect to hear all your favourite songs - Satisfaction - Get Off My Cloud - Jumping Jack Flash – Angie - Tumblin Dice - Honky Tonk Woman - Brown Sugar.

BABBA - Since 1994 BABBA have been thrilling audiences with their stunning re-creation of 70’s super group ABBA and the legacy of hits that will never grow old. The authenticity of BABBA’s sound and melodic harmonies of Agnetha, Frida Benny and Bjorn, joined with the renowned melody blends of the original group. BABBA will take you on a musical journey through time, to when satin was king and dancing queens ruled the dance floor! You know the songs – Dancing Queen, Waterloo, Mumma Mia, Ring Ring…and many more.

Tickets Are Selling Quick. Get yours from www.topendshows.com.au

You may also like the following events from Top End Shows:

Tickets for That 70'S Festival Bendigo can be booked here.