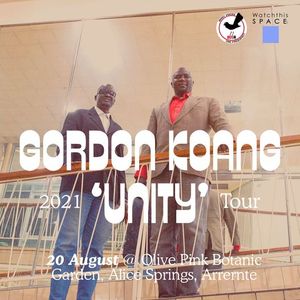 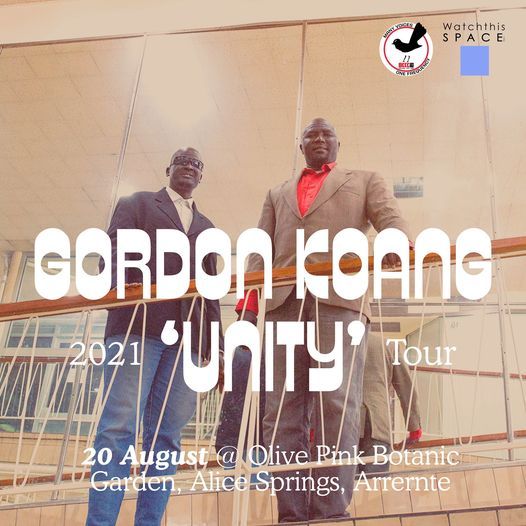 Music in Exile, Watch This Space & 8CCC Community Radio are proud to announce that GORDON KOANG is bringing his band to Central Australia for the first time to celebrate his acclaimed album, UNITY. With previous tour plans cancelled due to Covid restrictions, Gordon and his band are incredibly excited to have the opportunity to perform this album for you, our audience!

This concert is held in the unique setting of the Olive Pink Botanic Garden, located on land developed as a reserve for arid region flora by Miss Olive Pink in the 1950s.

Released mid 2020, Gordon’s eleventh album, Unity, captures his unparalleled and unwavering positivity. Featuring singles, ‘Asylum Seeker’, ‘Stand Up (Clap Your Hands)’ and ‘South Sudan’, messages of peace, love, and unity are prominent throughout Gordon’s music and are sentiments that seem to become ever more relevant in our current global context.

It is this positivity in Gordon’s music that brings people together - strangers join together on the dancefloor to groove to his catchy melodies, and there is a deep feeling of connection in the collective hope that one feels when listening to his songs. Gordon’s music and his ability to articulate something innately human has resonated with audiences globally. A household name and affectionately known throughout Africa as ‘the King of Music’, Gordon’s music has now garnered recognition in his adopted home, Australia. Most notably, Unity, was nominated for Best Album of the Year in the Australian Music Prize, and he was the winner of BIGSOUND Levi’s Music Prize, alongside numerous Music Victoria Award nominations. Gordon has sold-out headline Australian tours, and his live performance has been a highlight set at festivals including Meredith Music Festival, Strawberry Fields, and Perth International Arts Festival.

Richard A Matale was born in 1987, in the small village Town of Pageri in the republic of Southern Sudan. Richard is one of seven children who lost their father in their early ages and were raised by their Single Mother Laudina Tinya Ladu. Richard and his brothers and sisters grew up in a Northern Uganda Refugee camp.

He came to Australia in 2004 and started practicing dancehall and ragga music singing in 2011. His music is a combination of central African rumba, ragga, Afro Zouk and West African music. The artist is known by his stage name as Abiabi Richboii 'TheGreatone. Abiabi music can be described as a route to conciseness, a revolutionary music, a music that comes from minds, bringing the reality of what has been hidden. His music’s carried out information and feelings for the best of individuals.

This event takes place at Olive Pink Botanic Garden on Arrernte country.
Free for everyone under 16.

Music in Exile
Music in Exile is a new initiative aimed at creating space for artists working in culturally or linguistically diverse communities in Australia. We hope to use the resources at our disposal to collaborate with artists and share some of their incredible stories. Music in Exile is very much an artist-driven initiative; we aim only to offer our services where it is desired, to listen to artists and collaborate with them in building a trajectory for their careers in Australia. We firmly believe in the principle of ‘nothing about us without us’, and undertake our activity accordingly. The project is also carried out without any desire for profit – all income from our activities will go directly to the artists.

Watch This Space
As the only Artist Run Initiative (ARI) in Central Australia, since 1993 Watch This Space (WTS) has provided a constructive and supportive environment for artists to develop, collaborate and experiment through exhibitions, residencies, performances, offsite projects and an onsite studio community, all within a unique geographical, social and cultural landscape: Tyuretye/Mparntwe (Alice Springs). We support contemporary art dialogue in the region both inside and outside a gallery space, encouraging, nurturing and promoting Central Australian and visiting artists.