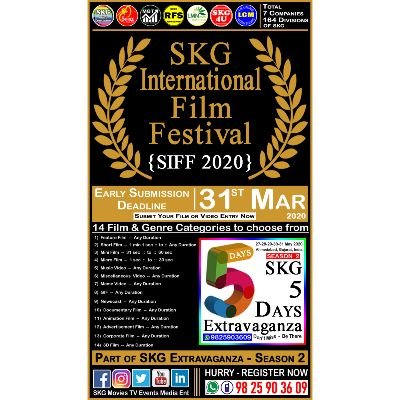 14 Film & Genre Categories to choose from :

Anyone can submit the Film / Video & can participate from any of the below 7 levels :

3) All Official Selections will be displayed on all our Social Media, Brochures, Banners, Posters, Other Places

# Just like an Open Ticket, this -- UNIQUE CONCEPT -- is called -- OPEN SUBMISSION

# Film or Video, which you wish to Submit for SIFF 2020, might not yet be created or started even. But still, you can Submit your Film or Video under -- OPEN SUBMISSION

# In future, you can submit under any of the 14 categories with maximum Time Duration as decided by you -- for eg -- you don't have to specify the category name (( for eg - short film, music video, etc )) at this moment. You can specify it when you actually do the submission

3) If anyone wants to submit more than one version per film / video, then each version will be considered as a separate entry

4) The original Film / Video may be produced on 35 mm, 16 mm, 4K, HD, Any Mobile Phone, DIGI BETA, BETA SP, U-MATIC, DV or any other manner or form, but the Film / Video must be available on PEN DRIVE / CLOUD DRIVE for presentation or preview purpose

5) Film / Video must be original & must be non-disputed

6) Film / Video must be without watermark & advertisement

8) If selected, a DCP (Digital Cinema Package) : Server JPEG 2000 or a Blue Ray or a DVD will be required for the screening

9) For promotional or public relation purpose, SKG may, for as long as it wishes, use any photo or digital film clip or video

11) Fees are Non-Refundable & cannot be returned under any circumstances

Step 1 : Fees can be paid through any of the below methods ...

# One Main Poster of the Film / Video, which will be used in an Exclusive Image which will be created by us & promoted from now till the end

Film & Genre Category (Choose from the above 14 Categories) ...

Film or Video Submitted by ...

1) By entering your Film / Video for consideration for SKG International Film Festival, you authorize that your work is cleared for this Festival & you accept full legal responsibility for the Intellectual Property therein & you shall indemnify & hold harmless the SKG International Film Festival, including our officers, employees, business associates, affiliates, sponsors, partners & owners, from and against any & all claims, liabilities, losses, damages, costs, expenses & penalties (including but not limited to lawyer's fees & cost of the court) which may be incurred by reason of any claim involving copyright, trademark, credits, publicity, screening & loss of or damage to the screening videos entered in the festival. Once the Film / Video is submitted it can not be withdrawn under any circumstances.

3) SKG International Film Festival does not pay screening fees or pay any amount to present your work. Filmmaker / Videomaker will bear all the cost of shipping or couriering the Film / Video & any additional promo materials to the festival. No materials will be returned

5) All other matters / rules & regulations not mentioned here & questions / queries arising from them, will be decided by SKG International Film Festival Organizing Committee & it will be binding to all the Participants

6) By submitting the Film / Video, you declare that you are authorized to submit the Film / Video for the SKG International Film Festival & that there is no material in the Film / Video which is Libelous or Defamatory or Untrue or Violates any Right of Privacy or Publicity or any Person or Group or offend Sentiments, Feelings or Sensibilities of any Caste, Community, Religion & Sector or promote Racism or ill will in the Society 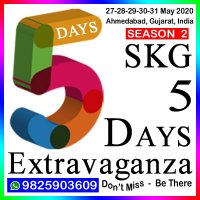